Army plays a significant role in maintaining the harmony and security of a country. In the age, every country must have an army to protect its premises and people. In this age of competition, each nation must possess some military force to assure the security. The United States and Russia are the countries that have the most powerful armed forces in the world. The reason behind this is that both countries are developing by leaps and bounds. So, they require a power to secure them from the external threats.

In the first year of the office, Donald Trump has laid great emphasis on increasing the productivity and strength of the Armed forces of the United States. Apart from the US, there are many other countries like India, Russia and China that are beefing up their military. Between the years 2012 to 2016, more military weapons were supplied across the world than any other times.

There are many factors that define the strength of the Armed forces of a country. The head to head comparison of nations is quite difficult. Looking into more than 50 indicators, Global Fire Power has compiled 2018 Military Strength Ranking.

The most important factor that is considered while defining the strength is the diversity of the weaponry possessed by a nation. The geography and natural resources of the region are taken into consideration. Adding to that the number of available armed personnel also add to the factors. The nuclear assets of the country are one of the primary indicators. The stockpile of warheads is assessed before indexing the nations. 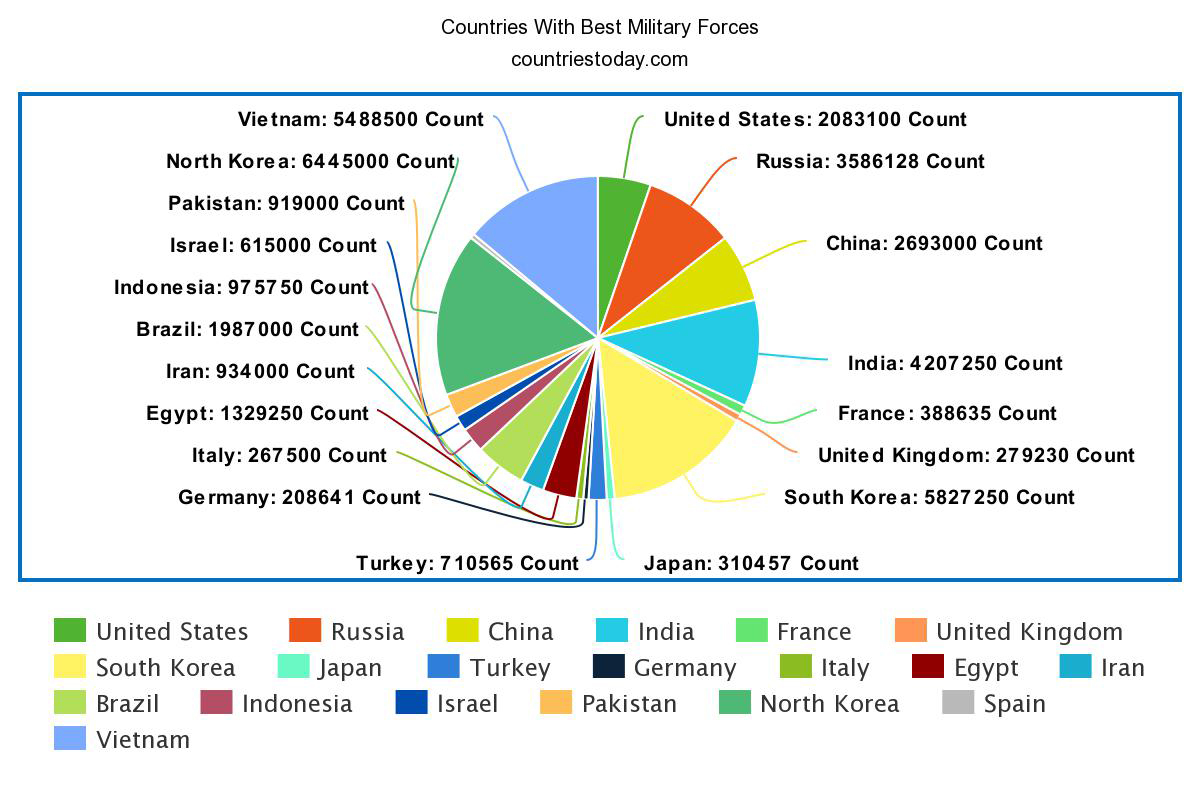 Down below is a list of countries that have the best army in the world:

United States: The Best Armed Forces In the World

The United States is at the top of the list in countries that possess the best military forces. The state is one of the most developed nations in the world. Thus, to assure it’s an authority and to affirm it’s security to the world. The United States has a massive population of 326 Million people, and it has a 2,083,100 army personnel to protect the country. Adding to that, US also possesses the best weaponry in the world. It has the latest weapons crafted with perfection. The United States is also on the list of countries with the most nuclear weapon. It was also one of the first countries to produce and test nukes.

Russia: One of The Most Powerful Military Forces:

Russia stands second on the list of countries with the most strengthened armies. It has paid much heed towards strengthening its army to ensure protect itself from other countries. Three million five hundred eighty-five thousand one hundred twenty-eight soldiers are present to protect the country from any threats and attacks. Russia spends a total of 47 billion US Dollar on its army. It also has the most number of nuclear missiles in the world.

China is one of the most developed and hardworking nations in the world. It leads in the world in technology, production and many other fields. So, to ensure the safety and for the smooth progression, the country has developed a strengthened army. These soldiers are trained in the toughest environment to fight whatever comes in their way. China has a total of 2,693,000 military personnel on duty and spends a budget of $ 151 billion on its defence.

India stands on the 4th rank in countries having the largest armed forces in the world. It has made many atomic bombs that can hit wide ranged targets all around the globe. Having a vast army of about 4 million soldiers, the country’s defence mechanism is quite stable. It spends more than 47 billion US dollars on its military annually.

The air power of a country also needs to be strong to stand straight in the times of war. These can help in surveillance, special ops, rescue operation and lots of other talks. For air defence, India has 295 different planes. These include aircraft carriers, frigates, destroyers, attackers and other aircraft. The country has strengthened its army in the recent year because of the threats from Pakistan and China.

Indian Navy is also quite stronger as compared to other naval forces. It secures the fifth rank on the list. From nuclear submarines to aircraft carriers and destroyers, India has a wide variety of maritime assets.

A having a score of 0.0417, France has the fourth largest army in the world. It has 279,230 active military personnel. The country has also established some military bases in Africa. It manufactures the warships by itself. The nuclear assets of the country are also quite strong as it has about 300 warheads carries by submarines. Adding to that it also has some ballistic missiles that can be launched from aircraft.

The Army of France also has a program called French Foreign Legion. Through this program, France recruits people from different nations. These forces are said to have trained people from 150 different countries of the world. The training of these special military personnel is quite tough as they are trained to bear severe conditions. These ops are said to survive in severe weather situations where a normal human being cannot survive.

A total of 50 billion dollars is spent on the armed forces in France. It has 832 aircraft and 227 combat tanks. The naval forces of the country are also quite strong. It has two aircraft carries, 13 frigates and several submarines, patrol vessels and others.

The United States is currently on the sixth rank according to Global Fire Power Report 2018. The UK has one of the strongest armies in the world with a military population up to 279,230. Of the total army personnel, 197,730 are active and on duty and about 81,500 people are reserved for crucial times. The Power Index of UK is 0.1917.

The country has 832 aircraft in which 103 are fighter jets, 143 attacks aeroplanes, 342 are used for training purposes, and 297 are used for transportation. Helicopter strength of the nation is 333 of which 49 are attack helicopters.

Speaking of Combat tanks, UK has 227 of them. The naval assets of the nation are also quite strong as it has 76 naval vehicles. These include 13 frigates, six destroyers and two aircraft carriers. Each year of 50 billion dollars is spent on the Army of the United Kingdom.

Adding to that, UK is also a nuclear-powered nation. The first nuclear bomb experiment was conducted in 1952. The United Kingdom has 225 nukes. United Kingdom is also a part of the Non-Proliferation Treaty (NPT). The country stated that it would reduce it’s nuclear stockpile eventually. They are expected to have 180 warheads by the end of 2020.