Impact on the Ecosystem of the World

This, in terms, has increased the amount of garbage produced by humans as if there are more people, they will produce more quantities of junk in their everyday life. This has resulted in increasing the land, air and water pollution and has drastically disturbed the ecosystem of the world. The environment is getting more and more polluted every day which makes it harder for the upcoming species to survive.

In many countries, the landfill of the waste material is banned. This is because they it affects the ecosystem. There are proper rules and regulations for trash management. People have to pay heavy fines if they violate the rules. The municipal authorities of different nations are working on different ideas to devise techniques to properly recycle and reuse the garbage.

Countries that produce most waste: 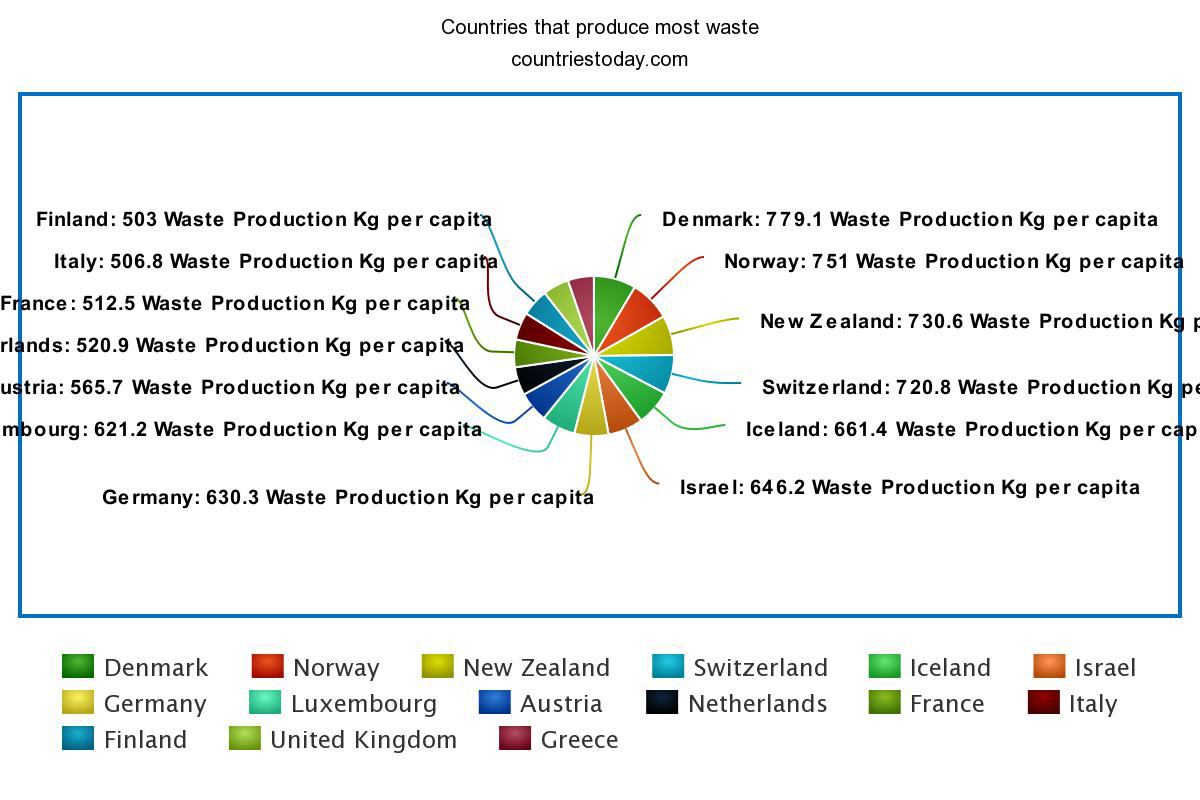 According to the studies of Organization for Economic Co-operation and Development (OCED), down below are the countries that produce the most municipal waste as of 2016:

Denmark Produces Most Waste in the World

OCED published a report in which it examined the statistics of trash generation of the year 2016. As of this report, Denmark was the country that produced most rubbish in the year 2016. The trash production in Germany was 788.4 kilograms per capita. There has been an increase in waste production in Denmark as compared to the statistics of last year, but the country has been the top trash producer in the previous two years.

The public of Germany is generally aware of the recycling procedure, and as the country is well developed, it has increased it’s recycling capability. Latest technologies are deployed for the sorting and treatment and recycling of all the garbage.

So even though most litter is produced in Denmark, the government and other environmental authorities have paid sufficient heed towards the garbage management and recycling which helps the country to manage less pollution from human activities.

Norway: The Second Most Waste Produce

As per the stats of the year 2016, Norway was second on the list of countries producing most trash in the world. Norway produced about 751 kilograms per capita in 2016. Although the production is massive, the country has a proper system of recycling the disposed of substances. Latest junk incinerators are installed in Norway which helps the country cause less pollution. This also helps in conserving the resources as the rubbish is converted to reusable things.

The waste is processed in the incinerator, and only the clean trash comes out of the machine. Later on, it is also rechecked for any harmful substances and then disposed of as landfill. The public is educated for garbage management. In every household, there are three categories for disposing of. There’s a blue bag in which only plastics are thrown which is recycled and reused. There’s a green bag for any kind of food articles. Biogas is made from the disposals in green bags. Rest of it is thrown in the white bag which goes to the plant for the proper disposal.

Although burning the disposed of material also causes pollution, but still, the authorities state that the modern incinerators are efficient as they cause much less pollution than the older ones. But the trash is burned to produce fuel. So that helps in conserving energy.

As per the statistics of the year 2016, New Zealand is 3rd on the list of countries producing most garbage. The total production is about 730.6 kilogram per capita as compared to the statistics of 2015 the production has increased as it was 698 kg per capita back in 2015. The country has paid a lot of heed towards the matter. Many methods for proper disposal of wastage have been devised which help in recycling.

Landfilling is one of the widely used solutions for proper disposal. The residential trash in New Zealand is quite large as compared to the household wastage of OCED. It mostly contains the bulky waste material including the garden and home renovation waste. These are taken into the landfill. In the other countries, the household wastage is taken in plastic bags and the other bulky disposal material is counted into the total municipal waste. But in New Zealand, the total waste is more than other countries as it contains the landfill construction and demolition wastage. 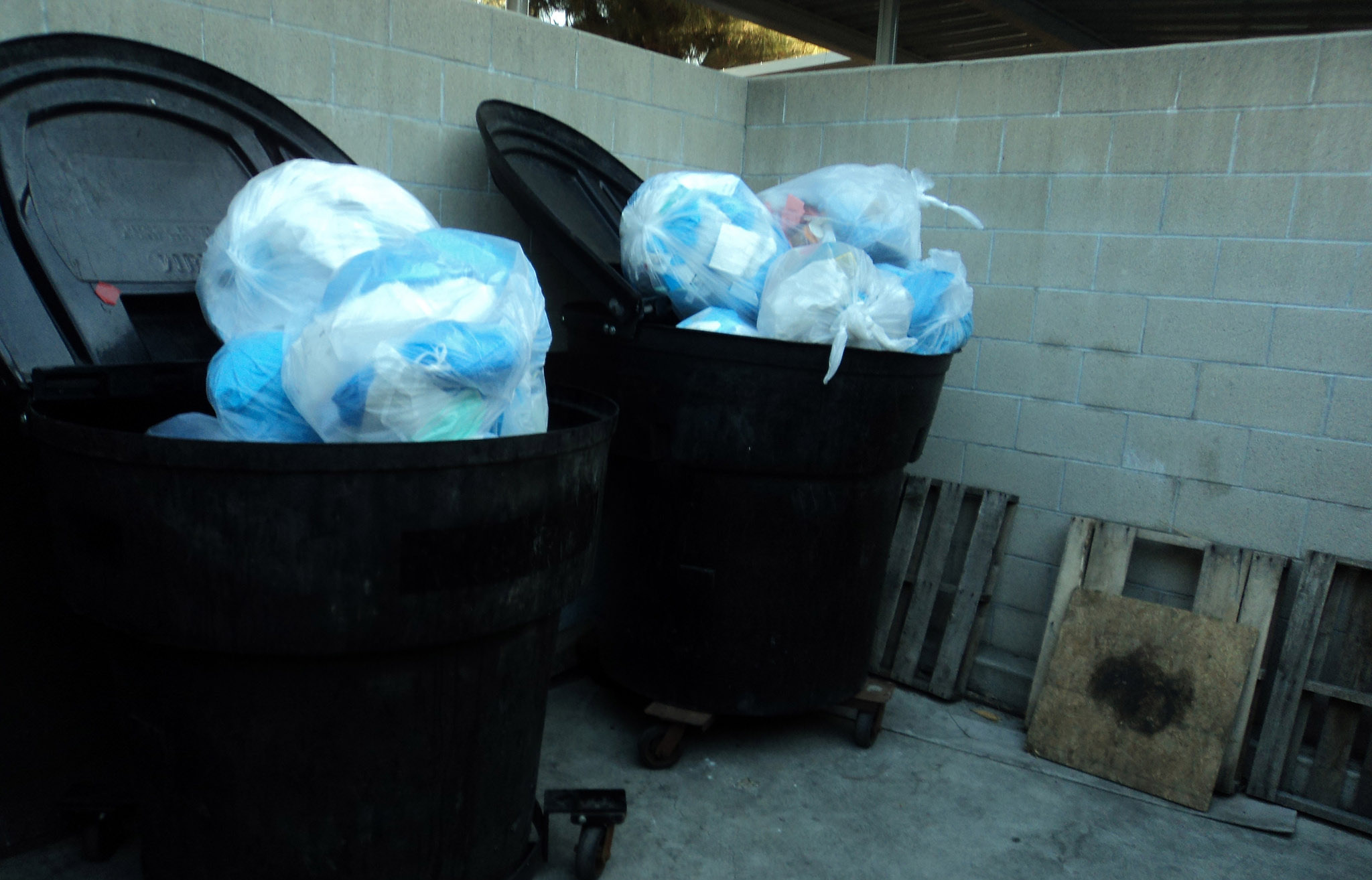 A national policy was initiated by the Labor government back in 1990, and the purpose of this policy was to decrease the solid garbage by 20 per cent. The announcement of this policy had a significant impact as the local authorities, and some of the industrial population started taking steps to play their part. Later on, the government revised the policy in 1992.

In 1996, the policy was revised again, and it laid many other principles for reducing the production and proper disposal. The government listed many outlines for clean production and the management of landfill wastage. It emphasized the incorporation of garbage management hierarchy in the plans. This hierarchy consisted of the following steps:

REDUCE – To reduce the production and the activities that produce rubbish.

RESUE – To reuse the products if possible rather than throwing away after first use.

RECOVER – Recovering any product or energy, if possible.

TREAT – Treating and processing the junk properly before disposing of it off so that it doesn’t have an adverse effect on the environment.

DISPOSAL – Properly disposing of the wastage safely in some land which is assigned for the purpose.

Switzerland stands fourth on the list of most waste producing countries. It produces about 720.8 kilograms per capita garbage. Although the production of junk is way more than usual by the Swiss are great at recycling. The government and other local authorities have put in a lot of effort to educate people not to throw garbage outside. Instead, they should focus on recycling.

With time and advancing technology, the Swiss nation has adopted a national recycling policy. Many private companies take up all the trash and burn it to produce heat. The retrieved energy is then supplied to the national heating network. With the network, the heat used to keep the homes warm in winter.

In southern Europe, they don’t have any methods to use the heat emitted from the rubbish plants. So it goes wasted from the chimneys. But in Switzerland, this garbage is burned and used as fossil fuel.

Anna-Carin Gripwall is a director of communication a Swedish disposal Management company, Avfall Sverige. She said that in most of the European countries, landfilling of the garbage is banned. The companies and authorities have to pay fine. So they send their trash to Switzerland. They have also been working on devising other techniques to properly recycle the garbage.

The municipalities are also researching to devise automated methods of garbage collection. They are investing to launch automated vacuum services so that the litter is automatically collected by the machines. If the devised system is implemented, there would be no need of vehicles for collection. Adding to that the underground containers could help in keeping the trash off the streets to get rid of smells.

Iceland secures the 5th spot on the list, producing 661.4kg per capita waste. The population of Iceland is not that much. So they have limited finances to deploy machines and methods for proper disposal of garbage. There are no many industries in Iceland. So the garbage that is to recycled has to be sent outside the country for appropriate disposal and reuse.

So most countries that produce the most garbage are aware of that fact that they have to take radical to reduce the production of rubbish. The governments of these countries are also working on different projects to process the waste and reuse it in one way or another. Many countries have installed garbage incinerators that process the trash and produce energy from it. Adding to that the landfilling of waste is also quite dangerous, as it destroys the land and deteriorates its quality. In many countries, the landfilling is banned, and people are charged with hefty fines if they violate the rules. So they export the waste to other countries for processing and recycling of waste.