The average global peacefulness of the world has declined in the last four years. The score went down by 0.27 percent in 2017. The Global Peace Index report of the year 2018 depict that 92 nations have declined in the last few years. But if we look on the bright side, there are 71 counties that have improved their score. Middle Eastern and North African nations have scored less on the index, and they are considered to be the least peaceful countries. Four of the ten least peaceful countries belong to the Middle East and North Africa. In spite of the armed conflict and the instability across these areas, they have slightly improved their score in the last year.

Europe remained to be the most peaceful region in the world. All the European countries have a better score than the other nations. But in the last two years, there has been political instability over here. That is primarily because of alternative political parties and anti-EU sentiment, increased terrorism impact, and increased perceptions of criminality.

Top 20 Most Peaceful Countries in the World: 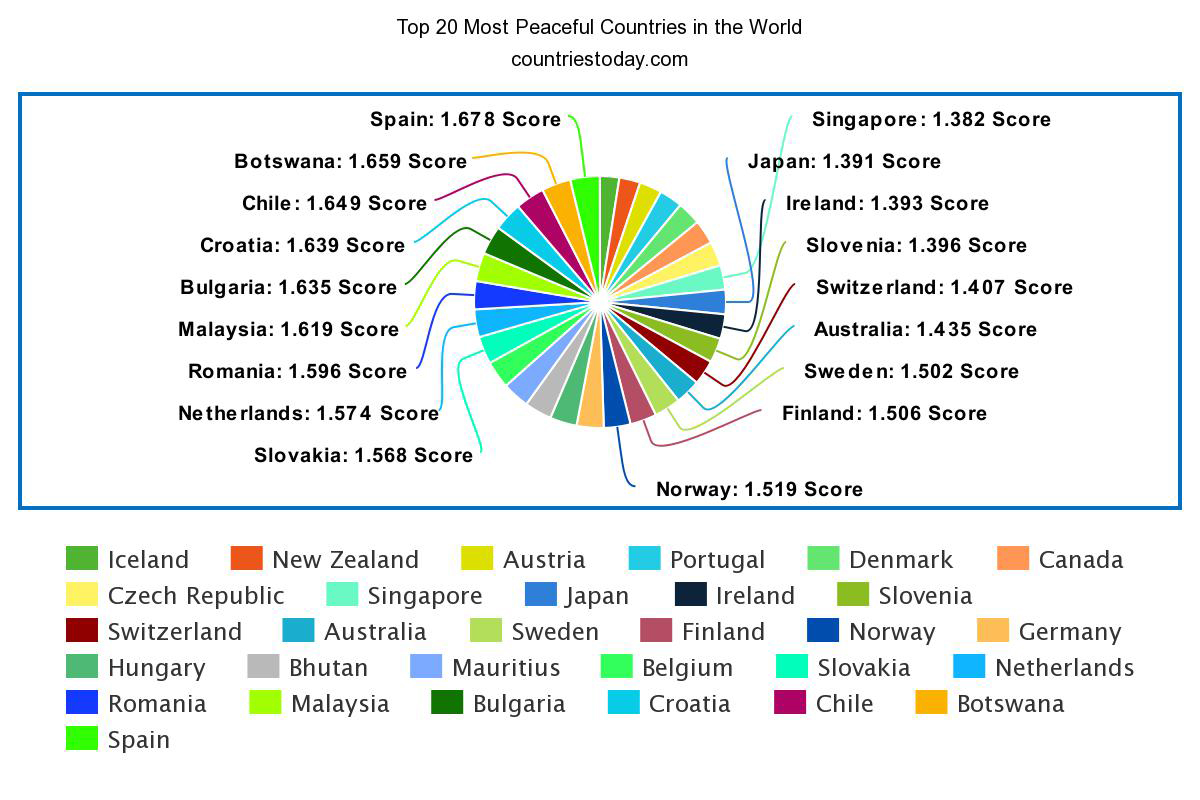 Following is a list of top 20 countries that are most peaceful as per the Global Peace Index report:

The Global Peace Index has three domains. These domains include Safety and Security, Militarisation and Ongoing Conflict. The situation of peace in a country is determined by the average rank of every country in all of these domains. If we specifically look at the Safety and Security domain, Iceland, Norway, Denmark, Singapore, and New Zealand score the most. Afghanistan, Iraq, and Somalia were the ones that scored least.

Looking at all of these domains, we acknowledge that Iceland, Norway, and Denmark lead the world in all three domains and that is why their overall score is higher than in other countries. On the other hand, Afghanistan, Israel, and Somalia are the countries that have low ranks in all of the three factors. That is why they appear at the end of the list in the GPI.

Iceland: The most Peaceful Nation:

Iceland ranked first in the Global Peace Index. The country has a remarkable score of 1.096. So we can say that the people of Iceland can sleep well at night. The country has maintained the first rank for ten years in a row now. Iceland has no air force, standing army or navy. It is also known to be a NATO member with the smallest population. The literacy rate is quite stable over here. The children are sent to school in the initial years, and they pursue their career by acquiring higher education.

The crime rate of the state is also quite low. There are fewer murders, crimes, and other petty thefts and robberies. The subjective sense of well-being is also quite impressive. It is also ranked in one of the nations that have the best job rates. More than 97 percent of the people here consider themselves as middle working class. The people over here are quite satisfied with their income, and they stay happy. That is why there is less tension between the economic classes in Iceland.

New Zealand is also known to be one of the happiest places to live in. That is because of the economic, social and political conditions over here in balance. People from all over the world plan their trips to visit this beautiful place. Its scores in domains of domestic and international conflict, militarization and societal safety are also remarkable. The health and medical facilities over here are much advanced. But New Zealand has one downside. The country is facing a shortage of affordable housing. That is why many average people cannot afford to buy a house. Adding to that, the difference between the rich and the poor is a bit higher than average. This has now become a major problem and now has become the top economic issue.

Austria is also one of the most peaceful countries in the world. The country has kept the third rank since 2014. But it didn’t rank last year as it went down to 4th position. It is also known to be one of the happiest places in the world. That is because the income, housing, and jobs are quite stable.

Down below is a list of 20 countries that secured the least score on the GPI. These places are also consider unsafe, risky and least favorable for visitors.

If we look at the GPI, we come to know that Europe, North America, Asia Pacific, and South America have maintained their positions in the world. They are known to be the best regions as per GPI. But all of the scores of all of these regions has declined in the last few years. That means that the most peaceful regions are becoming relatively less peaceful. Middle Eastern and South Asian nations are the least peaceful countries. These regions have slightly improved safety and security domains in the last few years. SO that is a good indicator that these nations are on their way to progress.

The United States is one most developing nations, but the country scored quite less on the GPI. The score of the country has decreased in the last three year. In 2016, the US secured 103rd rank, and a year later, in 2017, it secured 114th rank. As of the statistics of the year 2018, the country is now on the 121st rank. It is quite shocking that this powerful nation couldn’t score better. The researchers have found that the country couldn’t score well because of political problems. The hardening in partisanship was one of the issues that made the situation even worse. 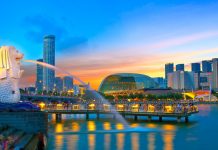