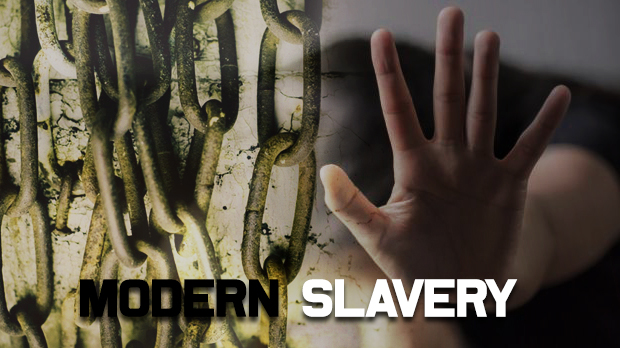 We have named our countries as independent countries with free citizens and free will. This all sounds fake when we hear the tales of modern slavery; of how a human has been a slave in all ages from Stone Age till now. We have always been slaves to someone, and the slavery of this era is called modern captivity. Modern captivity also is known as new-slavery or contemporary slavery is enslavement under institutions. This captivity refers to human trafficking to other suppression methods to recruit and labor a person against his will. This labor can be coercive labor, commercial sex or any type of work they want to get done through these modern slaves. It is estimated that around 21 million to 70 million people are modern slaves depending on the definition of modern captivity being used.

Why is Modern Slavery prevailing?

What kind of profession comes under the umbrella of modern slavery?

Chattel slavery is the oldest form of slavery. In chattel slavery a person made slave is treated as property because he/she is bought from someone. There still exist slave markets where people bid on the slaves put up on auction. Sex slavery can also be seen as chattel slavery. Mauritania has an old history of chattel slavery which still happens in spite of the laws made forbidding slavery.

Around 35-40 countries around the world enslave their citizens by forcing them temporarily to join the military. This kind of slavery is from the government. People are forcibly made to join the army, do labor work and even work outside the countries under government order. If not followed the governments punish them.

Prison labor is forcing the prisoners of a country to work for no wages in and outside the prisons. Millions of prisoners in China are subjected to a crucial job, and millions have lost their lives while laboring. China legalized reeducation scheme through labor. China targets ethnic and religious minorities in this case. There are tons of labor camps working in China. The US also pays as minimum as $0.7 per hour to the prisoners who work as labors. 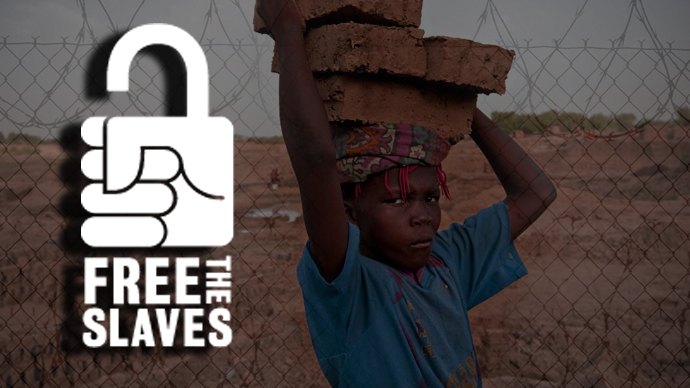 Bonded labor is labor that is imposed on a person as a form of a loan agreement. The borrower promises to pay off the debt via labor, and the loan is designed in a way that it can never be repaid. Often generations get trapped in slavery to repay a loan taken by a parent or grandparent. This culture is common in South Asia.

People around the world are promised jobs and taken to foreign countries only to seize their documents and made to work as sex slaves. The illegal immigrants are also taken advantage of because they have no access to the law. UAE, UK, USA and a few other rich countries exploit immigrants by forcing labor on them.

Children, boys and young women from developing and underdeveloped countries are trafficked into rich countries like the US, Eastern Europe, and South East Asia. Twenty-five percent of these trafficked girls and boys are still active in the sex industry. These people are treated as sex objects and subjected by unimaginable physical violence with many cases of genital mutilation reported in the sex industry.

Forced marriage and child marriage is legal in many countries like Mauritania, Yemen, and many Muslim countries. This is also a form of modern slavery which is highly prevailing in Islamic states. Even the US allows minors’ marriages as long as legal consent is there and the girl is pregnant. Two hundred thousand minors were married, mostly to older men from 2002-2016.

Twenty-six percent of modern slaves are children. In war zones, children are kidnapped and sold to political parties to be used as soldiers. Child slaves are used in the sex industry, cotton and cocoa fields, and fishing industries and as maids. 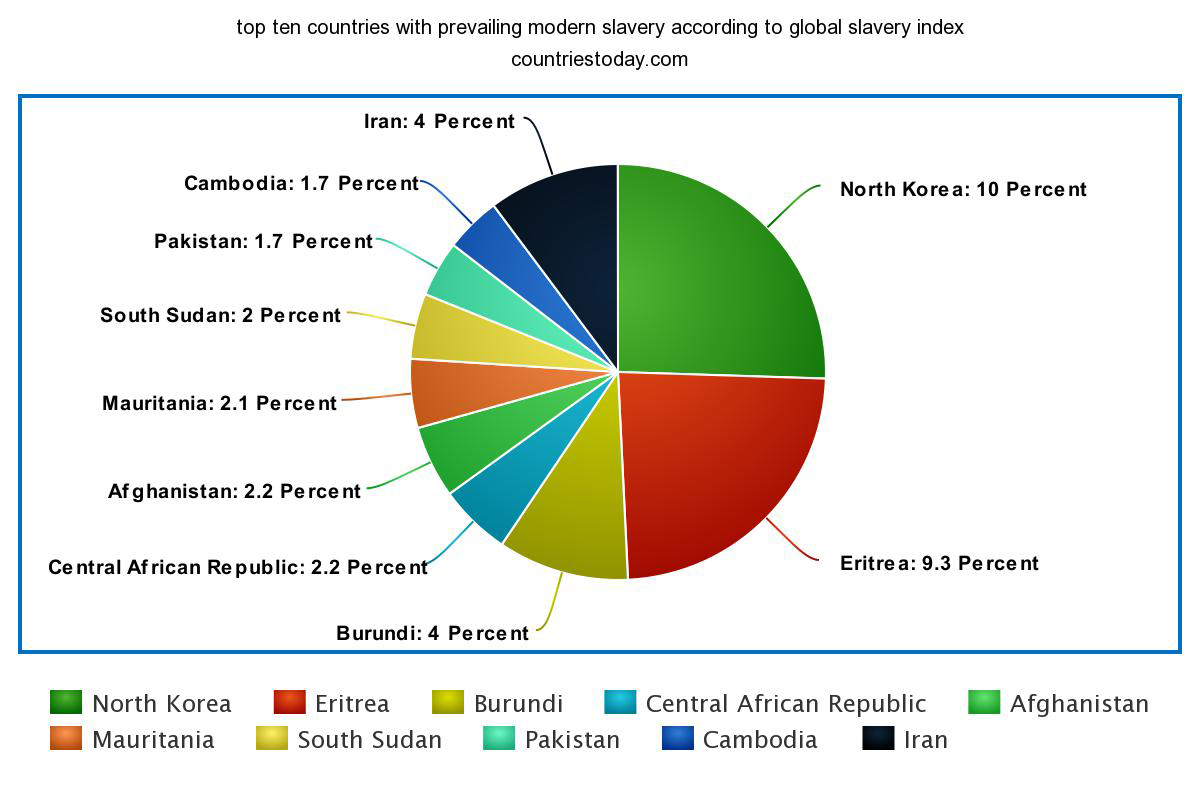 Let’s talk about the top ten countries with prevailing modern enslavement according to global slavery index.

1 in 10 people in North Korea are affected by modern slavery and making it the top ranking captivity infested country in the world. Government forces labor on so-called free citizens. According to 2018 Global Slavery Index, 2.8 million North Koreans are modern slaves. Korea earns US$975 from the labor done by young people doing dangerous construction work and girls and women being forced to make clothes in factories. 1.2 million Soldiers in made to do construction not related to defense and all these labor unpaid. 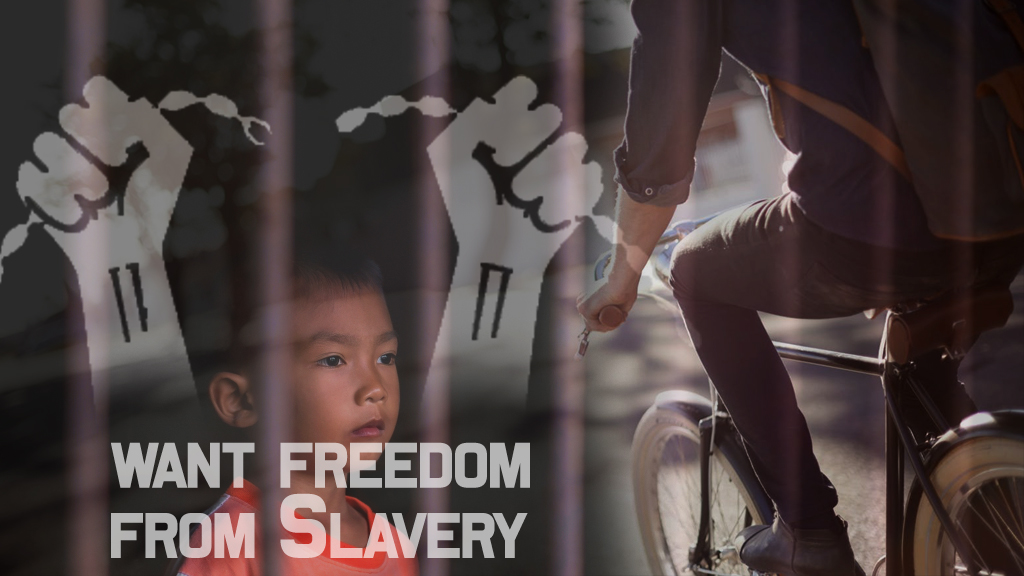 It has the highest prevalence of modern slavery among African countries with 9.3% slavery rate which is almost 1 in 10 people. According to UN investigations about 300,000-400,000 people in Eritrea are affected by enslavement.forced labor, sex labor and other forms of slavery.

The government also forces labor on citizens.451, 000 of the population are slaves. It is the second along North Korea whose governments are mainly responsible for enslavement.

According to the Global Slavery Index 2018, the total number of people living in modern slavery in Burundi are 408,000 with 39.95/1000 estimated proportion of the population living in modern slavery. The vulnerability to modern captivity in Burundi is about 72.93/100. This is one of the top countries for children trafficking for the purpose of using them as child soldiers and commercial sex objects. Burundi sells adults and children with albinism to Tanzania for genital and physical mutilation which they believe can be used in medicines to cure diseases, bring wealth and happiness.

Global Slavery Index 2018 shows that the number of people living in modern captivity in the Central African Republic is about 101, with a portion of 22.25/1000 people living in modern captivity. The vulnerability of citizens to be affected by this captivity is 100.00/100 people. CAR is another source country for child trafficking for sex and labor. Women are brought forced into prostitution and adults forced to do heavy labor. These children are also used in coal and diamond mines, shops, artisanal gold industry, commercial sex, agriculture and street vending. Girls are also forced into marriages with older men at whose hands they are sexually and physically tortured.

Afghanistan has a 2.2 percent slavery rate according to GSI 2018. The wealthy men in Afghanistan buy children, men, and women for sexual exploitation. Law and order in Afghanistan are more than weak, and the country is run by an extremist Muslim terrorist group known as the Taliban. Minor girls are wedded off to resolve conflicts, boys kept as sex slaves, and families working in fields from generation to generation as bonded labors.

It is a country where the child and forced marriages are legal; slaves put on auction in slave markets, slaves inspected physically and bought according to the work you want them to get done, i.e., sex, labor. This country still housed slave markets like ancient times even in 2018. It is the last country in the world to abolish slavery in law, and yet it exists because of the weak enforcement of this law.

Sudan is a country born out of slavery; no wonder captivity is still very open in this country. The people enslaved in South Sudan are distinguished by their color, ethnicity, and religion. Bilad Al-Sudan in Arabic, which means the nation of the black, has been a significant source of slaves to Arab countries. Enslavement is authorized in Sudan, and it is targeting a few races and eradicating them.

Pakistan has one of the most significant numbers of people entitled as slaves of some form. Twenty-five million are forced into labor, and 15 million are forced into marriages. Seventy-five percent of these slaves are women and children with 25% being children showing gender discrimination in Pakistan. People in Pakistan are enslaved in different forms like forced labor, the sex industry, bonded labor, domestic servants, child labor and state-imposed forced labor.

An estimated number of 261,000 people are living in modern slavery in Cambodia with 16.81/1000 proportion of the population living under enslavement. The vulnerability to modern captivity in Cambodia is 63.51/100 people. Children and adults are made to work under boded labor in tough conditions in Cambodia, and Cambodia’s construction boom shows how west making money on the bodies of Cambodian slaves is. Thousands of western construction projects operate in Cambodia using the forced, bonded and cheap labor.

Girls and women in Iran are trafficked to the UAE and the countries of the Persian Gulf. Men, women, and children are sold off for sexual exploitation and captivity. Women in Iran are subjected to forced marriages and prostitution. Irani children are used as beggars, labors to repay debts of their families. This matter was publicly acknowledged by Hassan Abbassi, one of the clerical regime’s main theoreticians.