World Economic Forum analyzes the situations and different aspects in the countries all across the world. The forum has engaged with the leading travel and tourism authorities to curate a ranking of 136 countries. The travel and tourism competitiveness reports look deeply into different factors and policies that promote tourism in a country. It looks into the steps taken by a country to ensure the safety of its citizens. Adding to that it also makes such an arrangement that the people who come to visit from outside are also safe. The report helps the stakeholders to work hand in hand to bring even more development and advancements.

We forum studies different aspects of 136 countries in the world and then ranks them as per their tourist competitiveness. The Travel and Tourism Competitiveness Report studies the extent to which the country attracts tourists from all across the world. Adding that the country’s openness to business and other security risks are also taken into account before ranking them. 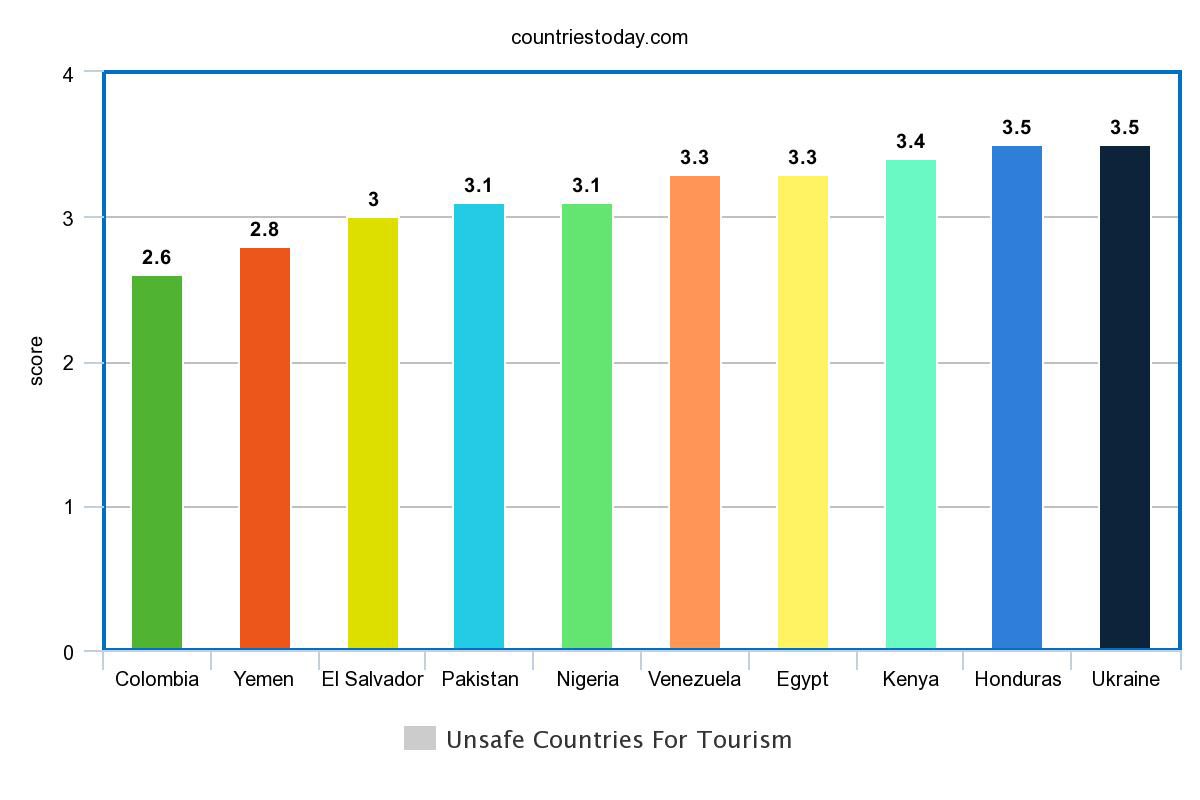 If we compare Colombia with the rest of the nations in the world, it has the worst score in the Tourism Competitiveness Index. With a rating of 2.6, it sits on the bottom of the list, and there are a bunch of reasons behind that.

Columbia used to be quite dangerous till 2000, but now the situations are quite better in here, but that doesn’t mean that it is altogether safe. The crime rate, kidnappings, and other drug trafficking are still present here. The southeastern and the southwestern parts of Columbia are considered to be the most dangerous regions in here. Most of the foreign countries don’t favour travel to these regions as there is a high risk of getting kidnapped. Adding to that the country is also famous for the drug wars. There are many drug wars in here.

Yemen: One of the Unsafe Tourism Destination:

Tourism is all about roaming around and having a good time. Sometimes, tourism also involves business. So when we think of going to some place for enjoying the vacations to have some time for our selves and even for our families. But Yemen is unlike those destinations where you would wish to travel for fun. The country is considered to be unsafe.

Yemen is one of the dangerous locations on earth, especially for tourists who are looking forward to collecting some memories from different sections of the planet. The nation is quite unstable, and not only the security is weak enough, but in some areas, it’s unclear that who controls the things in there. Adding to that there’s also threat terrorism, and some kidnappings have been reported. There are many reasons why these mishaps happen in the country. There are some terrorists, tribesmen and some other criminal groups that carry out such actions. Yemen has a score of 2.8 and comes second on the list.

El Salvador: One of the hostile nations:

El Salvador is ranked on the 3rd spot. The country has a score of 3.0 in the tourism competitiveness report of the year 2017. The country is also known to have the highest homicide rates as compared to the other nations across the globe. Groups and gangs have made their authorities out here. These gangs are involved in many illegal activities.

The primary safety issues are because of these street gangs as they are involved in the trafficking of drugs, arms and ammunition. A large number of people are included in the gangs. Some of them are also detained in cells, but they still have maintained their mafia out here.

The tourists are not that unsafe in the country, but the location is considered to be overall unfavourable as one can get hurt in gang fights. So if the travellers are aware of the places they are not supposed to go, they’d be pretty safe.

Pakistan is also one of the countries which are considered to be unsafe according to particular facts and figures. The country is on the list because of some terrorist attacks.

But on the other hand, Pakistan has many packs many mesmerizing places in itself. Many tourists still come to the country to have a view of some of the breathtaking places in the country. Some areas are packed with cultural essence, and some are known for their natural glamour. Some of the well-known places of Pakistan include Lahore, Karakoram Highway, Saif Ul Malook, Larkana and Taxila.

Nigeria is also one the countries which are not recommended for planning a trip. There are several reasons for that. First of all, as per the safety and security, the country is ranked 132nd out of 136 total countries that World Economic Forum conducted a survey for ranking them in the Travel and Tourism Competitiveness Report.

Overall, the as per the tourism industry, the country is ranked 129th. Islamic State West Africa and Boko Haram are the main groups that cause violence in the country. These groups are quite violent as they target schools, restaurants, entertainment locations, churches and other densely populated areas. The State Department of the United States advises that the visitors should be extra vigilant while going to the public gathering. Indiscriminate violence is common so the travellers should be extra careful about the whereabouts.

Venezuela: A risky Place to Go:

Venezuela also comes in the list of countries with dangerous circumstances. It is one of the nations that have the highest crime rates. The crime and civil unrest in Venezuela are mainly because of the shortage of food, electricity, water and other necessities of life.

The incidents of murder, robbery, homicide, kidnapping and carjacking are common here. People are warned to travel to Venezuela by the US State Department.

Egypt is ranked 7th on the list of countries where there are unfavourable situations for tourism. The primary reason for that is the ISIS and some other extremist groups that cause severe violence. They target the public locations and the tourist spots.

The groups here in Egypt have been plotting to target and attack several areas. Considering the events that have happened in the past, they are expected to strike with a little or in most cases, no warning. The hubs of transportation, religious sites, government offices, markets, malls, and other urban areas are quite insecure. Although the places are heavily guarded but still, the terrorists and extremists make their path towards violence.

Tourism is very important for the economy and development of the country. The countries that provide favourable conditions and safe circumstances to the tourists not only earn foreign exchange but they also make their position in the international market. If safety and security are ensured, the tourism of the nation helps in preserving the culture. So when the tourism industry flourishes, the country can spend more on maintenance and development. Adding to that it also helps in maintaining peace with other countries or across the globe. France, Spain and the United States are known to be the best countries as per safety and security. Because of promoting tourism and protection, these countries earned significant revenue from their tourism.

Listed below are the countries that generated the most revenue from tourism in 2017. 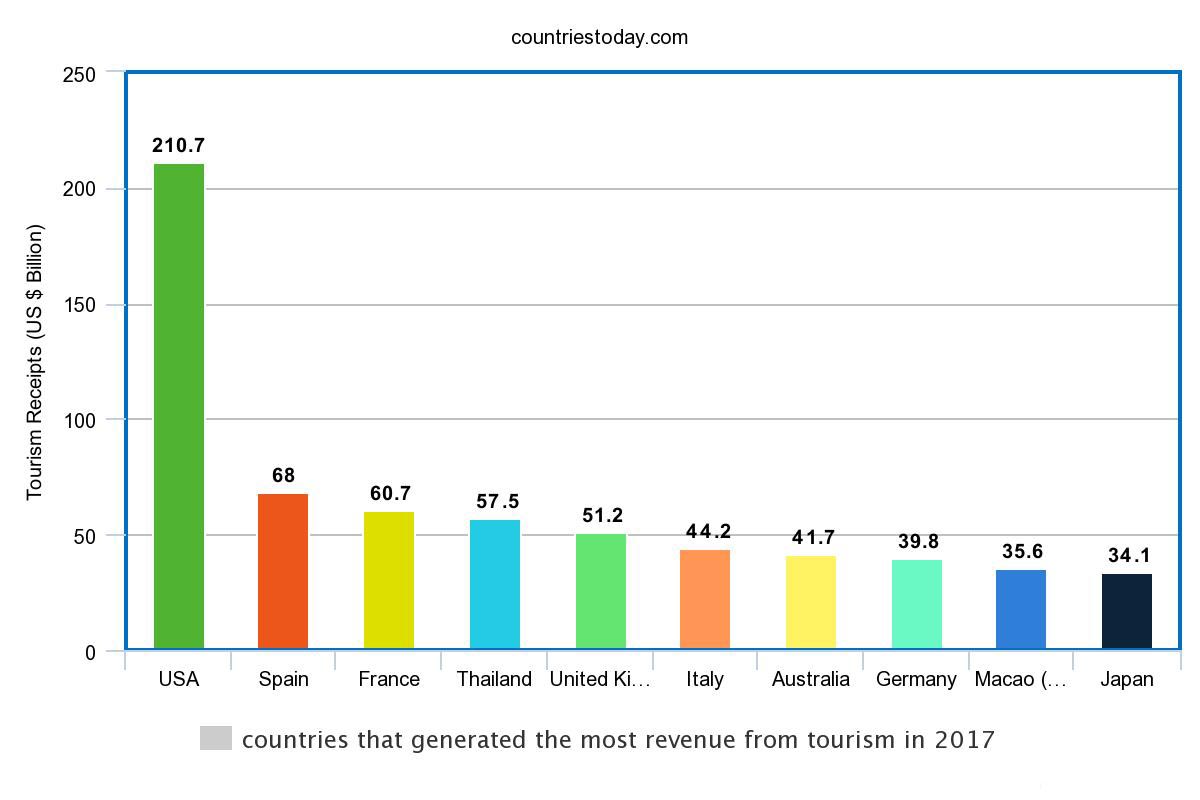 United States: Generating the most Revenue from Tourism:

The United States first on the list of countries that have earned the most foreign exchange through their tourism. More than 70 million people flew to the United States in 2017. These tourists from other nations spent more than 221 billion dollars in the US. Tourism is promoted in the country, and for that, the security is better here.

The glorious locations and the fantastic nightlife of New York and Las Vegas attract tourists from all across the world. The major attractions of the United States include the Hawaiian beaches, the Alaskan subarctic wonders and the Grand Canyon.