The primary content of tobacco is nicotine, and it’s planted that is planted in different parts of the world. It requires a specific climate and atmosphere to grow properly. It only grows in areas in sunny areas where the temperature is mild. China, India and Brazil are the leading producers in the world, and they use and supply it all around the globe. The leaves are picked from the fields and are left to dry out. Once the leaves are dried, several products are then made from these leaves including cigars, cigarettes, chewing, shisha and pipe tobacco.

Tobacco addiction is one of the deadliest addictions in the world as it is directly associated with cancer, heart diseases and many other complications. The government of many countries have imposed strict laws and policies to help people quit smoking. Smoking is banned in closed places like schools, restaurants, offices and other places in many countries. Hefty fines are imposed on violating the rules. The United States has strict laws and regulations on the consumption of tobacco. The legal age of smoking is 18, and the sale of cigarette to individuals is prohibited.

Tobacco is produced in different countries around the world. There are a total of 125 nations that cultivate it. More than 4 million hectares of land in the world is used for the production of this deadly plant. The global worth of the crops makes about 20 billion dollars. If we look at the total agricultural land in the world, only 15 of this land is used for cultivation. The trend of production has changed since the 1960s. Americas used to be the bulk producers of this, but now the African and Asian region produces and exports more tobacco than any other region. China and India are the major producers now. The production in China has increased by 5% in recent years, and the revenue generated from selling is now about 9 billion dollars.

Countries that produce most tobacco: Down below is a list of countries that produce the most tobacco in the world. China is on top of the list producing 2805 metric tons of tobacco every year which is much more than any other country.

The Largest Producer of Tobacco:

China is the largest producer of Tobacco worldwide. The country produces 2805.62 metric tons. About 2355 billion cigarettes were produced by China in 2016. The country itself also has a large count of smokers as 47.6% of the total male population are smokers and 1.8% of the female population are smokers. The situation is quite alarming as about 1952200 people die every year because of smoking and other diseases related to smoking.

It is usually grown in the vast rural areas in China and is the excessive plantation is the reason behind the stable tobacco industry of China. Growing tobacco in this poverty sickens areas also helps the poor farmers as they get paid for their productions. 70% of the total amount is grown in produced in the border and poor areas.

Flue-cured leaf, Burley Leaf, Maryland Leaf, and many other varieties are grown out here. More than 300 million people in China smoke. Roughly 57% of Chinese men and 3% of the Chinese women smoke. WHO asked China to impose a cigarette tax on the consumers as that would help them decreasing the smoker count.

India is the second largest producer of Tobacco in the world as it supplied 761.32 metric tons of tobacco in the year 2016. In 2017-18 India exported tobacco and products worth 934.32 Million US Dollars to about 100 countries. The tobacco board in India helps the growth and export in the country. Adding to that the authority also regulates the production. The board also estimates the required amount and regulates the production according to the demand, to maintain a fair price. The farmers are offered loans and quality fertilizers to grow export quality leaves. Auctions are also conducted by the board to sell it in a competitive manner.

Export to Other Countries:

Roundabout 70% of the total cigarette type tobacco produced in the country is exported to other countries. The local farmers and tenants grow various types of it in here. That is why India has become a one-stop shop for buying any kind. There are different climate and soil zones out here, and the cultivation and harvest of the crops continue for the whole year.

The assistance of Government and Other Authorities:

The government and the local authorities also assist the production in here. As new types of tobacco are being introduced, so a research facility called Central Tobacco Research Institute devises new methods for quality production. The research centres of other related companies carry out extensive research to boost the outcome. The FCV growers in the countries are also offered with crop and input loans so that the farmers can buy fertilizers at a reasonable cost.

The third largest producer in the world is Brazil, producing 675.55 metric tons every year. Tobacco is a significant export of Brazil. It is cultivated in many areas of Brazil. Tobacco is cultivated on about 1% of the total land area of the country. The major companies in the country include Souza Cruz and Phillip Morris, as they have 62% and 15% of market shares respectively. The consumption of Tobacco and it’s sub products is quite less in Brazil as compared to other countries of the world. Where 33% of the vast world population consumes tobacco, 16.9% of the total Brazilian population consumes it. Although China is the largest producer, it also imports tobacco from Brazil. It is exported to about 100 other countries across the world. Brazil also signed up for the World Health Organization Framework Convention on Tobacco Control and advertising of tobacco-related products is banned in the country.

90% of the produced tobacco produced in Brazil is exported to other countries. The significant importers include Belgium, China, United States, Russia, Indonesia, Netherlands and Germany. The production system is quite efficient as it is one of the primary sources of boosting the economy. The supply volume is adequate, and the quality is maintained. The growers here have direct contracts with the companies that further supply and export. So the growers also get some benefits with the companies. They get financial, technical and transportation assistance to their suppliers.

Adding to that the growers are also given awareness and tips for improving the production. The municipalities arrange events and educate the farmers and growers on how to keep themselves and their family safe from any damages. Child labour is prohibited here, and the farmers are not allowed to use their children for their work. They have to present the companies with certificates of admissions of their children.

More than 5.7 trillion cigarettes were consumed by people from different parts of the world. If we compare the consumption to last year’s statistics, it has decreased. Some countries have effectively controlled their consumption by implementing some rules and regulations. Nations like the United Kingdom, Australia some other countries have reduced the smoking rate. But it is still difficult to implement the concept of the smoke-free world.

Down below is the list of countries that consume the most amount of tobacco in the world: 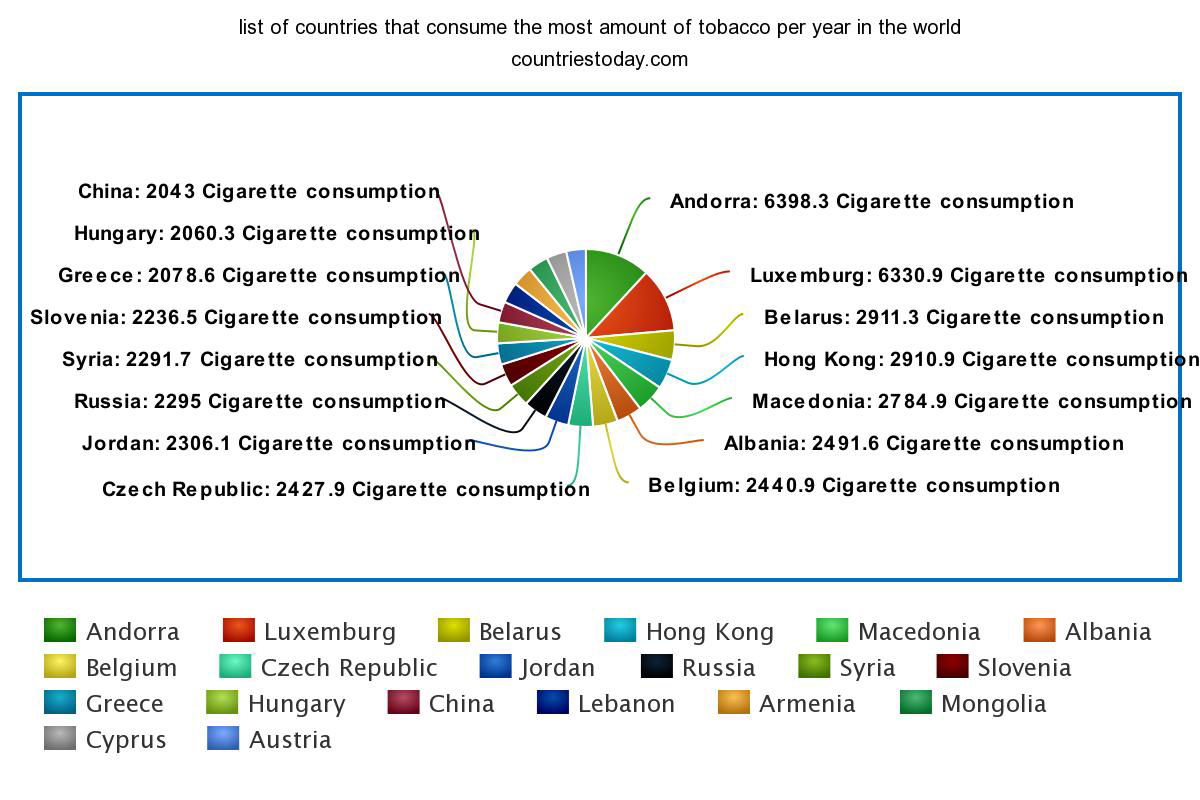 Andorra is a country that stands on top of the list in the consumption of tobacco in the world. It has made some progression in stopping the people from smoking, but still, a massive population smokes here. A lot of effort needs to be done to make Andorra smoke free. More than 37% of the total male population smokes here, and 19.6% of the deaths are caused by smoking. The female smoking population is 27.8%.