IMR stands for infant mortality rate. What is an infant? You should know the exact difference between the terms like baby, newborn and infant. Newborn refers to the babies from birth to about two months of the age. So the first two months of age is usually referred to a newborn. Infants mean the babies up to the age of one year.

What is Infant Mortality Rate

The rate of infant deaths is calculated by the number of deaths per 1,000 infants. This problem has been one of the biggest challenges not only the developed nations but also the third world countries. During the 20th and 21st century many steps have been taken to reduce the deaths of infants. Some of the nations have already made significant progress in addressing this issue. But in some countries, it is still a significant problem. Lack of funds and infrastructure, poverty, lack of medical professionals and discrimination are the significant reasons behind this issue. Adding to that, the infants are quite vulnerable to some diseases due to the weak immune system. These diseases include diarrhea, asphyxia, birth complications, pneumonia, and malaria.

Initiatives were taken By the Government and UNICEF:

The health and welfare organizations along with government can properly resolve this issue. The countries that have the highest rate of deaths in infants are not that stable. They don’t have the proper infrastructure for health. The countries with weak economies have to face this issue because they don’t have that much capital to improve the health facilities. Adding to that, the governments of many countries have worked for hand in hand with UNICEF to eradicate the misunderstanding in the birth of children. They have taken many measures to reduce polygamy, child marriage, illiteracy, inhumane laws and unawareness among the people.

Countries with the highest infant mortality: 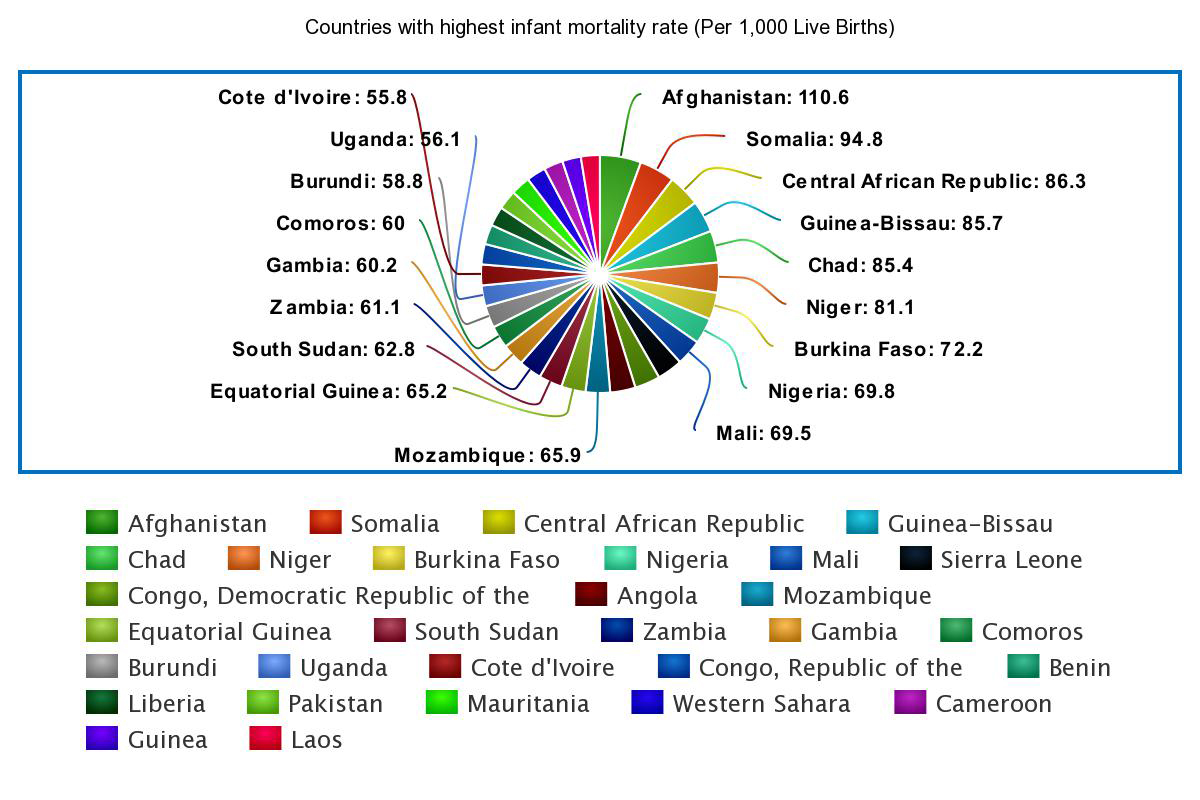 Following is a list of countries that have the most infant mortality rates:

Afghanistan: The country with the largest infant mortality rate:

Afghanistan is one of the countries that have the highest rate of infant deaths. In this country the rates 110.6 deaths per 1,000 infants. The reason behind this is the lack of medical facilities. In rural areas, access to medical facilities is even worse, and that is why the children have to suffer. The rights of women are not properly addressed in Afghanistan, and they also don’t have access to healthcare facilities. Adding to that, women also have to give birth to children at home. No doctors are available over there to perform standard operations. That is why children die, and in some cases, women also have to face deaths due to birth complications.

Somalia is an African country and has the second highest rate of infant mortality. The country also has the stands third on the list of countries with the highest mortality ratio. Due to the lack of healthcare and proper medical procedures, pregnant women have a risk of losing their babies. In most of the cases, they also lose their own life during birth. That primary reason behind this issue is the inadequate structure of public healthcare.

The Central African Republic stands third on the list of nations where there is the highest number of deaths in children in the first year of their life. The country is located in the heart of Africa, and it has suffered from armed conflict and rebellion for over a decade. Due to the disruptions and disturbances, the public health infrastructure is affected. As a result women and children don’t get proper care and nutrition.

More than 1 million people are already affected by violence. Adding to that, the financial conditions are also quite worse as the country is already hit with an economic crisis. More than 67% of the population survives on $1 a day. That makes it impossible for the families to take care of themselves and their children. Malnutrition is also a significant issue here. 38% of children suffer from malnutrition. To improve the situations, UNICEF has taken radical steps. About 200 children who are suffering from Severe Acute Malnutrition (SAM) are treated at the Therapeutic Feeding Unit every month.

Following is the list of countries that have the lowest infant mortality rate: 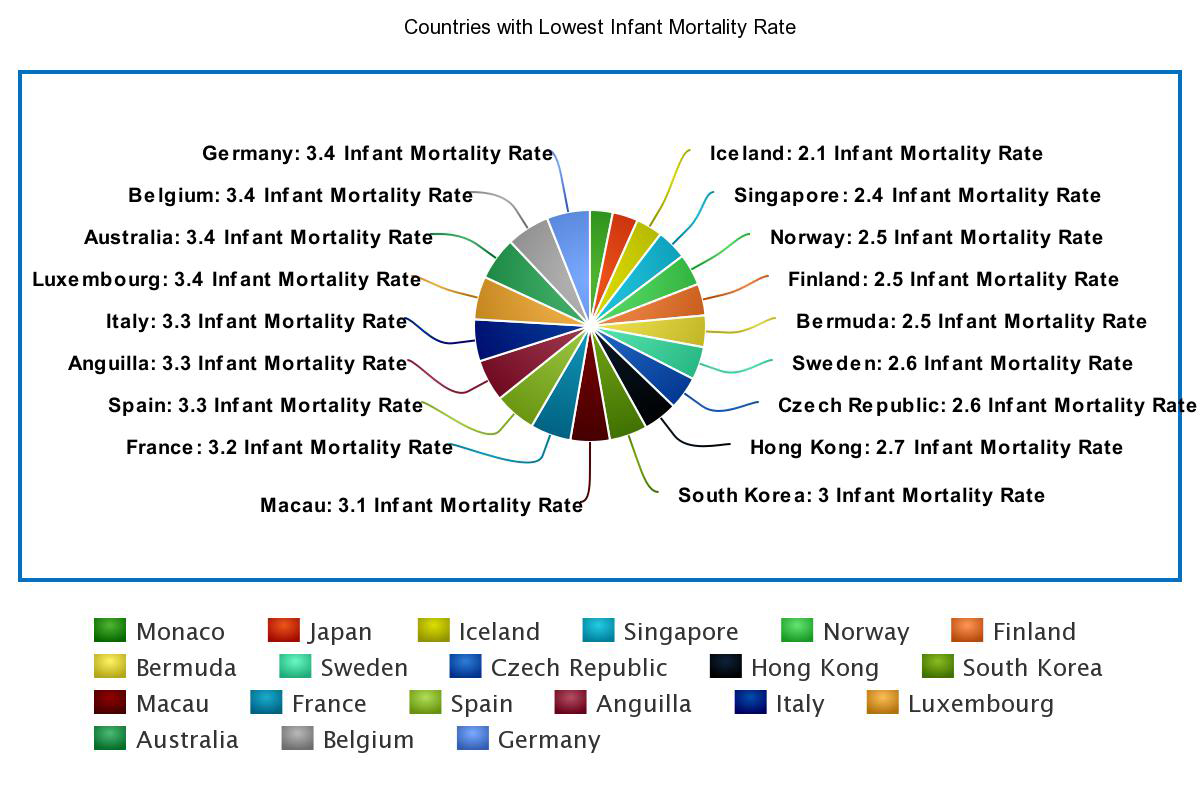 The low infant deaths indicate the health and well-being situations of a nation. Japan, Monaco, and Iceland are some of the countries that lead the world as they have the lowest ratio of deaths in the newborn. These nations have an average of 2 cases in every 1000 newborn babies. This is a great indicator, and it also exhibits that life expectancy of a region. A great budget of these countries is spent on improving the medical facilities, hospitals, and other hygiene affirmations. As a result, you can find more doctors and physicians in these areas, one more thing these nations also have the lowest birth rate.

There are many other factors why these countries have lower death rates as compared to other nations across the world. These factors include the overall income of the country, the education of mother, environmental conditions, per capita health spending and medical infrastructure, and laws against child marriage. In countries like Afghanistan, Mali and Somalia there are 100 deaths per 1000 newborn babies. The children over here have a high risk of dying in their first year of life, these nations also have the highest birth rate.

Japan is one of the countries that have the best healthcare facilities. The government and other organizations spend a lot on improving the medical facilities and hospitals. Due to these facilities, Japan has Japan is one of the countries with the lowest rate of infant deaths. Only 2 in 1,000 infants die in Japan. Not only that, but Japan also stands second on the list of nations with the highest life expectancy. The life expectancy is about 85.3 years as per the studies of the year 2017. In addition to the best healthcare system, the people of Japan have an active lifestyle, and their nutrition is also quite remarkable. They eat healthy food and keep themselves fit with exercise.

Monaco is the nation having the lowest rate of deaths per 1,000 infants. The government of Monaco lays great stress on improving the medical facilities. That is why the life expectancy of Monaco is also quite high as compared to other countries. The people eat fresh vegetables, fruits, fish, whole grains, and the intake of fat is quite less. That is why the mothers in Japan stay quite healthy, and birth and pregnancy becomes healthier and easier. Adding to that the doctors and nutritionists also help in improving the health of the baby and the mother. The infants have a lower risk of getting infected by diseases. So they survive for long and live up to an average of 89.4 years.