The indigenous Pemon Indian names of this waterfall are Kerepakupai Merú and Parekupa Vena. It is commonly known as Angel Falls in the rest of the world. This waterfall is located alongside the Río Gauja, Venezuela. It is the largest waterfall in the world with a total height of 979 meters (3212 ft). Kerepakupai Meru is one of the highest uninterrupted ones in the world. It flows through the Rio Kerepacupai Meru. It flows into a tributary of Carrao River, known as Churun River. The waterfall has a total of two drops, and the longest drop is about 807 m.

It is a well-known tourist spot in the country, but the tour of this place is quite complicated as it located in an isolated jungle. The river trips are often arranged between June and December as the water is much deep in this time. The water is relatively less in the dry season.

The second Highest in the World: Tugela Falls

Tugela Falls is located in KwaZulu-Natal, South Africa. As per height, it is the second highest in the world. It has a total height of 948 meters (3110 ft). It has five drops, and the highest one is 411 meters. Tugela can be seen from the entrance of the park when it rains heavily in the season. There has been a lot of controversies as Angel Falls are mostly said to be the highest waterfall, but some claim that Tugela Falls are the highest.

It is sometimes also referred to as “Thukela” where the word Thukela means sudden. That is because the water abruptly comes down from about 3110 ft. There are two tracks that lead towards Tugela of which the best trail is the one that leads towards the top of Mont-Aux-Sources.

Tres Hermanas Falls is the third largest in the world as it has a total height of 914 meters (2999 ft.). In Spanish, Tres Hermanas means Three sisters and that name is given to it for some reason. The reason behind that is, it has three drops. It is located in the Otishi National Park, Peru.

The landscape itself is quite mesmerizing as it’s covered by tropical rainforest. There are trees all around with the height of about 30 meters. Because of the wild terrain and thick forests, the Three Sisters is best when observed in ariel view.

Olo’upena is located in the United States. In an Island named Molokai, Hawaii, these waterfalls present a breathtaking site. They are etched into the cliff, so it’s quite challenging to take pictures of that. Surrounded by mountains on each side, the water drops below with even more speed in the rainy season. There’s heavy rain between November and March, and the flow is strong. The location gets more visitors at this time of the year. The total width of it is 12 meters, and the height is 900 meters. The total run is about 457 meters.

Yumbilla falls are located in the northern region of Peru. According to the WWD, it is the fifth highest in the world. Some other sources also rank it lower, but the point is that the landscape is mesmerizing and a hike towards the fall a lot to offer. There are two other waterfalls that come in the way to the Yumbilla. The Geographical Institute of Peru surveyed this back in 2007 and since that it is known worldwide. 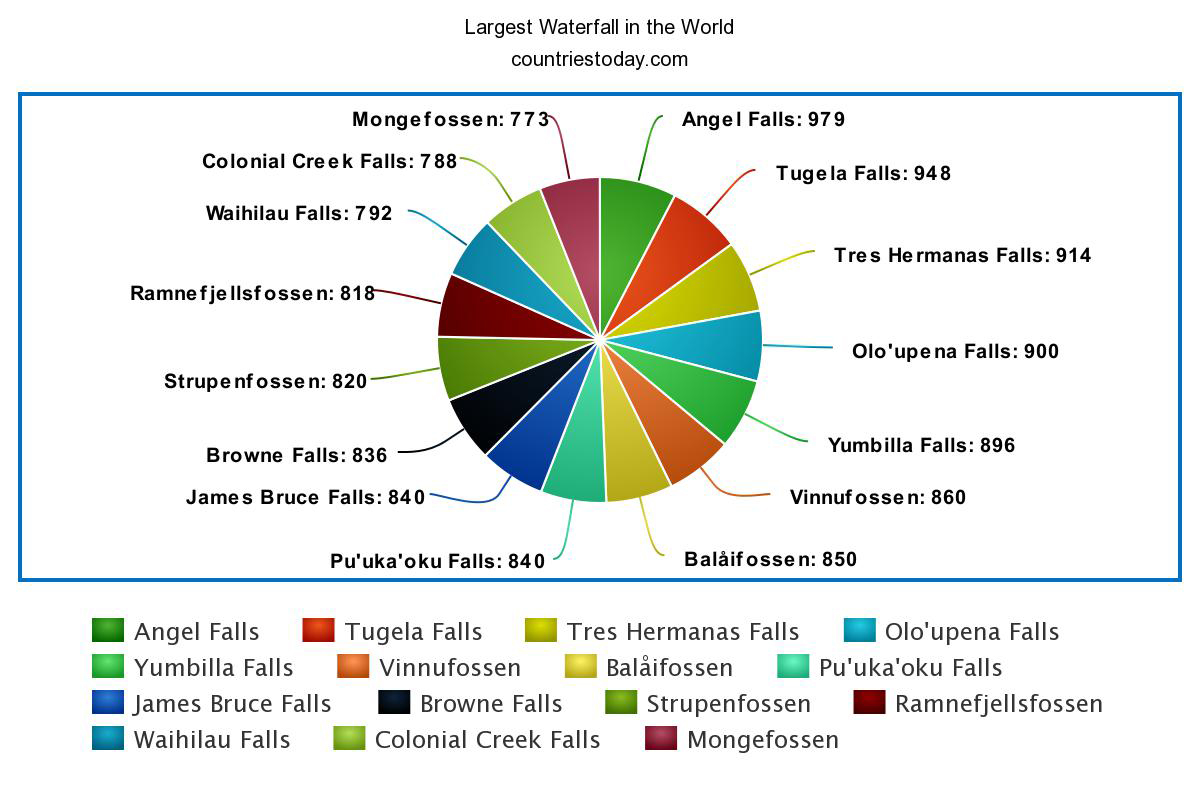 Victoria Falls Lying on the border of Zambia and Zimbabwe, Victoria is one of the most beautiful waterfalls in the world. The popularity of the located has increased in recent years. As per the statistics, it’s not the highest or the widest one. But still, it’s sometimes referred to as the largest because the abruptly falling water in sheets makes it look fantastic. It is quite iconic, and people also say that the view of Victoria is once in a lifetime view. People from Africa especially plan a trip to see this perfect craft of nature. Its total height is 108 meters, and the width is 1688 meters. They are named after the Queen of GB, Victoria.

Iguazu is a landscape shared by two countries, Argentina and Brazil. These falls are considered to be one of the largest in the world with a total height of 269 feet. And are 5249 feet. In width.

The scenery of this majestic landscape is so perfect that when Eleanor Roosevelt visited, it’s said that she exclaimed: “Poor Niagara!” From December to February, the flow is at its peak. But during these months the weather is quite rainy and wet. On the other hand, the place is a bit dry from March to September. But during the drier times, there are more visitors, and the place is crowded.

Niagara Falls on the borders of New York, America and Ontario Canada. It is located on the Niagara River. The river drains into the Erie and Ontario Lake. These waterfalls make up the highest flow rate than any waterfall located in northern America. It has a vertical drop of 160 feet. Its total height is about 167 feet. Niagara is very effective as it used as a source for producing hydroelectricity. Adding to that it is a well-known tourist attraction in both countries.

On the Canadian side, Sir Adam Beck 1and 2 produce the most power from these waters. On the other hand, Robert Moses Niagara Power Plant is the most power generating plant in the US. Both these plants have a combined output of 4.4 gigawatts.

The tourists are at peak here during the summer time. At that time of the year, the attraction is open to visitors in the morning and also in the evening. Floodlights light up the whole scenery from the Canadian side of the waterfalls.

Yosemite falls are located in California, United States and are one of the most mesmerizing ones in the world. The course of abruptly falling clear water produces a dazzling scenario. The best time to visit the located is Spring. This is because in Spring, there are wildflowers all around and the weather is quite mild. Winter season is not suggested the time for going out there because it sometimes snows out there. The total height is about 2,425 feet (739 meters) and has three drops in total. The longest drop has a height of 1,430 feet (436 m).

These alluring charms of nature benefit our ecosystem in many ways. Visiting these sites relieves your tensions and invokes a feeling of relaxation. Adding to that there are many advantages to waterfalls. We live in an age where a large amount of energy is required to power our industries. In this matter, waterfalls are have been proven of much use. This is because they help in producing hydroelectricity and adding to that they also help in agriculture.

The watercourse is somehow managed to irrigate the fields. If the fields are provided with sufficient irrigation for the proper growth of plants, more food can be generated by these. If we take a look at hydroelectricity. The basic principle for producing energy via water is to use the flow and speed. Water flowing at high speed makes the mechanical parts of power stations to move, which in terms, convert this kinetic energy into electric energy. So when the waterfalls from a great height, it has potential energy due to the gravitational force. So this potential energy is utilized to generated power.