With the advancements in technology, new machinery and apparatus for construction are designed to produce the highest skyscrapers in the world. Some of the most advanced countries in the world have the tallest buildings. According to the recent studies of the Council on Tall Buildings and Urban Habitat, there are more than 144 buildings in the world that are taller than 600 ft. (200 meters). According to the criteria defined by CTBUH, a building that has more than 14 stories or has a height of about 165 ft. can be considered to be Skyscraper.

Countries With The Tallest Buildings:

The table below shows the top countries that have the buildings with most heights:

Dubai: Burj Khalifa: The Tallest Building in The World

Dubai used to be a Bedouin village back in time but now it is one of the most beautiful and ultra-modern city with some beautiful places. Of all the Emirates of UAE, Dubai is the most organized and perfectly constructed. Burj Khalifa, the tallest building in the world, is located in Dubai. The building is sky high with a majestic height of 828 meters (2717 ft.). The construction of the building was started in 2004 and it took 5 years to fully construct this amazing skyscraper having a total of 163 floors including 9 maintenance floors.

Other than Burj Khalifa, there are many other tall buildings in this beautiful metropolis. There are 95 towers in Dubai that are more than 200 meters.

It is a major landmark in the history of tall buildings. This is because the designers and the developers of this redefined the possibilities of engineering that can be used in construction. The urban areas near the tower are quite centralized than any other skyscraper in the country. The basic structure of it is Y-Shaped. That helps in increasing the window area in the living areas.

Following Burj Khalifa, Shanghai Tower is the second tallest building in the world and is located in China. The building was constructed in 2015 has a total height of 632 meters (2072 ft.) and 128 floors above the ground and 5 floors below the ground level. This building is not only one of the tallest in the world but also has the fastest elevators in the world having a speed up to 20.5 meters per second. The building was designed by an American firm ‘Gensler’.

The tourists that come out here, visit the observatory on top of the tower which is located at a height of 546 meters. A panoramic view of the Huangpu river from here seems quite overwhelming from this sky-high observatory. The exhibition hall located on the B1 Floor attracts many tourists from all across the world.

The building has a total of 149 elevators. Form the total 108 of them are lifts. Only 3 of the lifts are used for going to the observatory within one minute. It holds the world record for this. In this tall building, there are 5 main functional areas. They are as follows:

The tower is a part of Abraj Al Bait which means Towers of the House of God. Makkah Royal Clock Tower is located in the middle of this and it is the largest clock face tower in the world. It is located at a little distance from the largest mosque in the world, the Great Mosque of Mecca. Saudi Bin Laden group got the contract to build this expensive skyscraper. A total cost of 15 billion US dollars was spent on the construction of this. 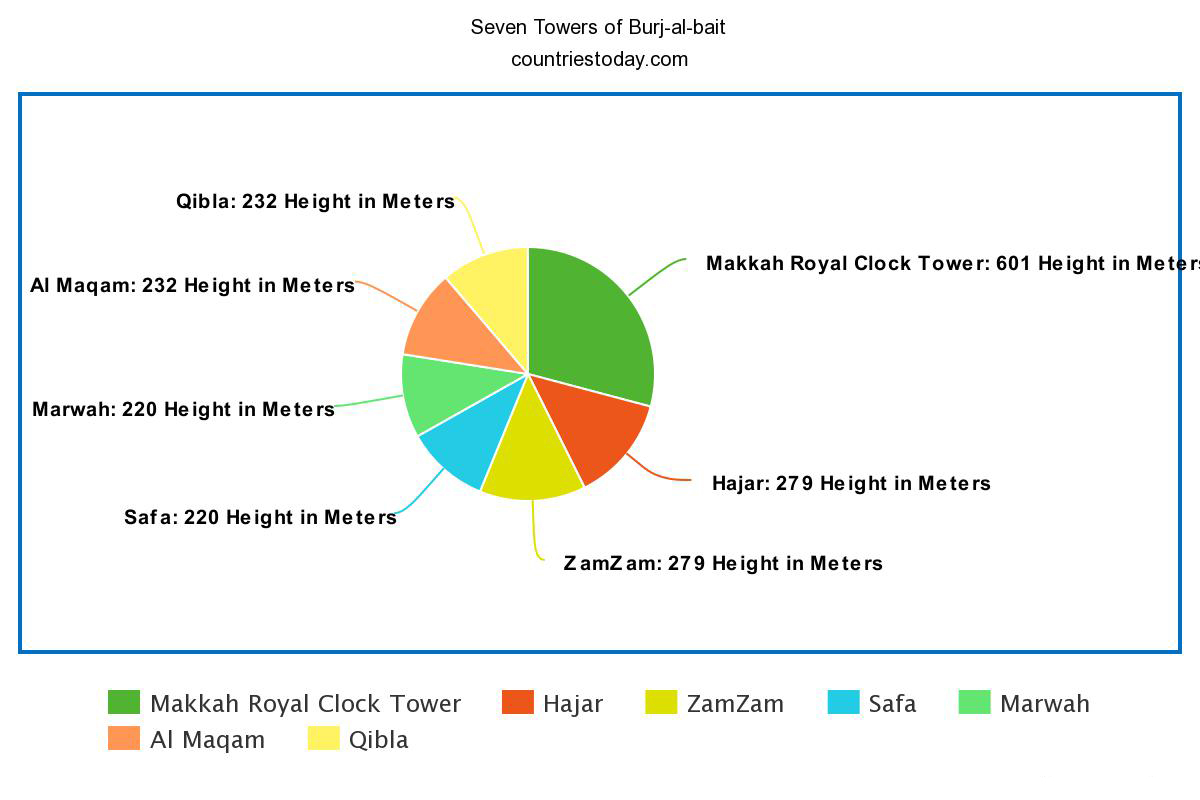 It is built in Postmodern architectural style. The construction was started back in 2004. All the works were finished in 2011. It has a floor count of 120. The top floor is at a height of 494 meters and the roof extends to 530 meters. It is basically a government mega tall complex having a total of 7 towers. Following are the towers:

The clock tower is the highest of all 7 towers and it has clock faces embedded for each side of the hotel. The highest residential floor is located at a height of 370 meters. This is just below the media displays under the clock towers.

These clocks are located on all four sides and can be seen from a distance of 25 kilometers (16 miles). These are the highest one in the world located at height of 400 meters from the ground level. The diameter of these is about 43 meters i.e. 141 ft. A total of 2 million LED lights are used to illuminate it at night. Arabic scripts are written on all the four sides of it. On the southern and the northern side, the engraved Arabic script says “God is the greatest”. On the western and eastern side of the tower, the Arabic script says “There is No God But Allah. Muhammad (PBUH) is the messenger of God”.

Lotte World tower is located in South Korea. It is sky high, extending up to 556 meters. Lotte Engineering and Construction was held responsible for its construction. The tower is used as a residential area and hotel.

The other tall buildings of the world include One World Trade Center located in United States, Taipei 101  in Taiwan, International Commerce Centre in Hong Kong, Lakhta Center in Russia, Landmark 81 in Vietnam, Petronas Towers in Malaysia, Al Hamra Tower in Kuwait and Ryugyong Hotel in North Korea. Jeddah Tower in Saudi Arabia is under construction and it is aimed to be the highest one in the world by the year 2020.