Due to the increased population in the European nations, there has been a lot of debate on the subject of immigration policy and security of the country. The highest number of refugees that came to Europe was noted to be the highest between the years 2014 to 2016. It is also said that if the growth continues similarly, Muslims could make up approximately 14% of the total European population.

As compared to the Muslim community in other European countries, the highest number of Muslims reside in France. According to the statistics of 2016, approximately 5.72 Million Muslims live in France. In the country, the number of Muslims is increasing day by day, and according to a research conducted by pewglobal, if the Muslims tend to grow at the same rate and if the migration rates remain the same, the Muslim population will make up 11 to 14 percent of the European population.

The population growth of Muslims is expected to be the most in France and the United Kingdom and according to the statistics, by 2050 Muslim will make up to 17% of the total population in these countries.

Germany is the country that comes second on the list of European nations that have the most amount of Muslims residing. The official name of the country is the Federal Republic of Germany. The study of Muslims count in Germany revealed that they are growing rapidly. From the year 2010 to 2016, the Muslim number rose from 3.3 million to about 5 million.

According to the studies of 2016, 4.95 Million of believers of Islam live in Germany. The number of Muslims is that high in Germany because of the Labor migration in 1960, and now Islam is one of the visible religions in the country. The mostly Muslims of Germany are from Turkey, and they make about 62% of the total Muslims. There are Muslims from other countries also, like Pakistan, Yugoslavia, Iran, and Afghanistan.

The country opened its doors for about 670,000 Muslims. Of the total number, almost 68 percent of them were Muslims. This happened from mid-2010 to mid-2016. It is adding to that there also 680,000 other migrants from other countries. This also happened during the same period, and 40% of them were also Muslims. Down below is the list of European countries concerning their Muslim population:

The Pew Research Forum stated that the community of believers of Islam is increasing rapidly in the major EU countries. Even if the migration is stopped, the population of believers of Islam will still increase. The primary reason behind that is their high fertility rates as compared to an average woman low birth rate. So if the migration is banned, the percentage of them will still rise from 4.9% to 7.4% by the year 2050.

The second scenario is the average immigration rate. According to this, the number of people that migrate to the European countries is reduced to a medium amount. In this case, the community of believers of Islam will still grow out to make more than 11% of the total European population by 2050.

As per the third scenario stated by the Pew Research Forum, if the migration levels stay high in these countries, Muslims could make up to 14% of the total population by the year 2050.

So as per the studies of researchers and the previous trends following are the effects of Migration on the population of European countries:

A variety is observed in the believers of Islam living in European places. Some of them are born out here while some of them have migrated here from other countries. Different religious groups include Shias, Sunnis, and Sufis. The threshold of commitment in them is quite diverse. Some of them are such that they don’t claim themselves different from others. They don’t follow up much with their religious commitment. While some of them are such that they follow all the teachings of their religion, these people tend to live their lives according to Islamic principles.

Views of Muslims In the Southern and Western Europe

The surge of refugees in the south and east of Europe has been a major topic of debate in the UK and the European Union since last few years. The recent attacks on in Paris and Brussels have also aggravated the conditions in these places. There is public fear of terrorism. The survey conducted by the Pew Research Forum depicts that there is still a connection between the refugee crisis and terrorism. This is because is because 8 out of the 10 EU nations have voted that terrorism is basically due to the large population of refugees.

The nations are not just worried about terrorism; they are also concerned about the economic burdens of the refugees. Half of the countries stated that the migration of people from other countries would cause economic imbalance. That is because they will take away the jobs and the social benefits from the native people of these nations. The nations like Hungry, Poland, Greece, Italy and France are offended by this issue. Whereas, some of the EU countries also support the refugees. They have a vision that these people make their nation even stronger with their work and abilities. 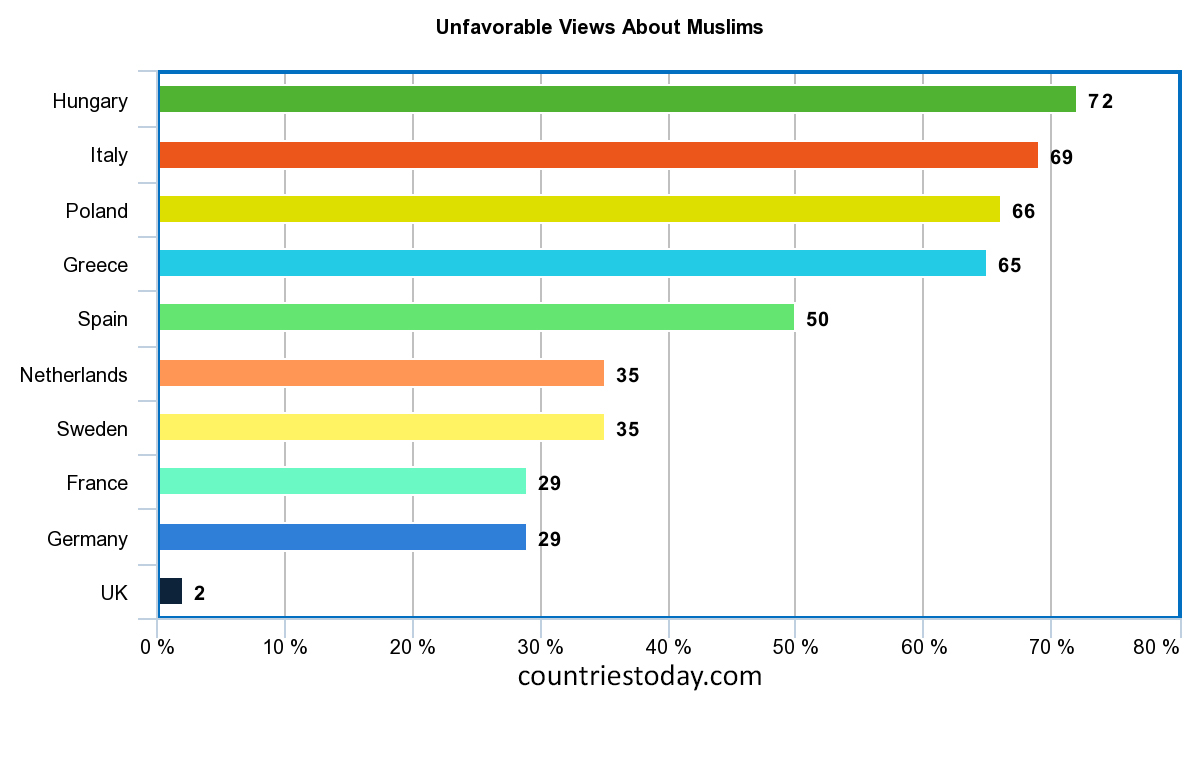 Most of the Muslims in European countries are migrants from other countries. Syria stands on top of the list migrating the most amount of refugees to these countries. Of the total migrants from Syria, 91% were Muslim. 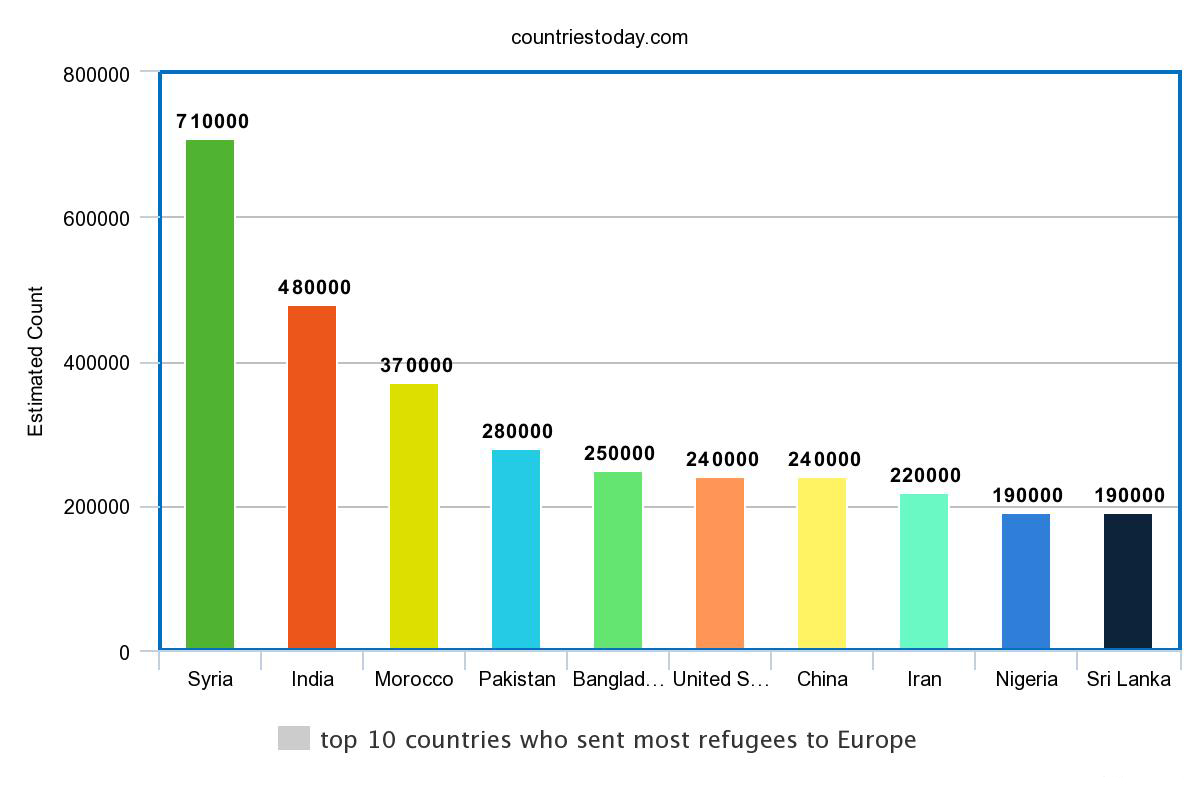 Listed below are the top 10 countries who sent most refugees to Europe:

There are other European countries that don’t have much Muslim population, and these countries include Czechia, Malta and Poland and they have 10,000, 10,000 and 20,000 Muslims respectively. 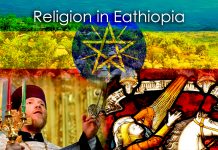 Most And Least Religious People Countries in the World