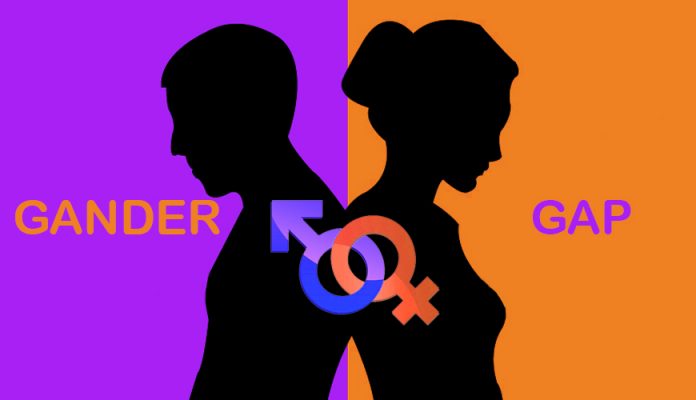 Men and women are like the front and rear wheels of a vehicle, a car can’t move properly if one of the tiers is damaged. The car of national progress can’t move forward if men or women of a country are not equally contributing to prosperity. We need women’s contribution more than ever because the Fourth Industrial Revolution is all about new challenges and opportunities. We can’t grow and survive if half the population is ignored and suppressed. Their ideas, creativity, talent, and skills went unused are a big loss to global prosperity and development. 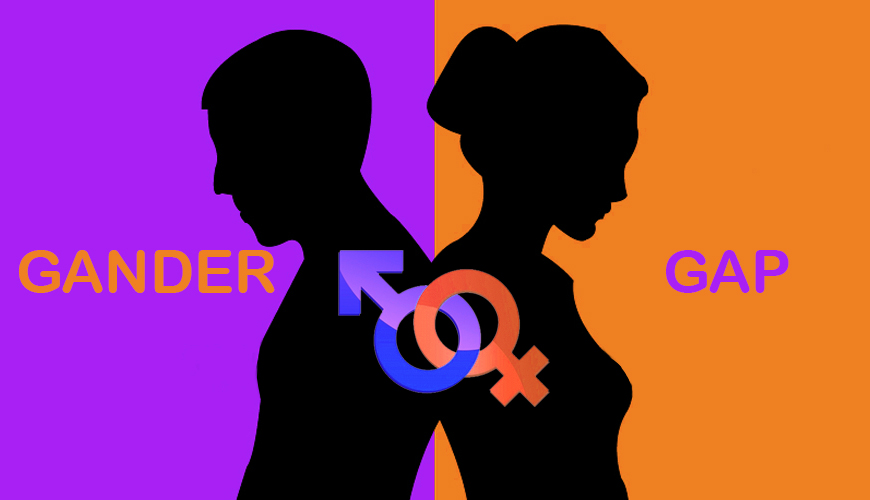 Gender inequality brings down nations as a whole. Many countries are trying to reduce that gender gap, and many have improved their conditions. Health, education and political rights are being made accessible to both genders, but there is so much more to do.

This article is based on the Global Gender Gap Index report does comparison and ranking of the countries based on four key factors which are health, education, economy, and politics. This report was made for Forum’s Centre for the New Economy and Society which uses this data to build platforms for improving the bad conditions and promote development. This center also helps women around the world to seek new opportunities to earn money to reduce the paid space and appear in various leadership platforms. The original report ranked 149 countries on the four metrics mentioned above; Economic Participation and Opportunity, Educational Attainment, Health and Survival, and Political Empowerment.

We will see for ourselves which countries in the world have the least gender space and what we can learn from them. But first, we will look at some of the critical findings of the report to get an idea of how this malfunctioning of society is slowly removed and what are the regional conditions.

The key finding of The Global Gender Gap Index

The average gender gap based on population is 32.0% which is yet to be removed.

The biggest gender gap is in political empowerment which is 77.1%; economic condition space is about 41.9%, the educational gap is about 4.4% while the survival gap is about 4.6%. Over the last years, only economic and participation and opportunity gaps have been slightly reduced. This means we still have such a vast difference to fill.

We have a substantial political space as only 17 out of 149 countries have women as head of ten states. 18% of ministers and 24% parliamentarians is the global average.

The economic gap between men and women is mostly because of the unpaid household and other tasks women around the world do. Women spend twice as much time men spend on the household.

There are 44 countries whose more than 20 percent of women are illiterate. On average, 65% of girls and 66% of boys have enrolled in secondary education globally, and just 39% of women and 34% of men are in college or university today. 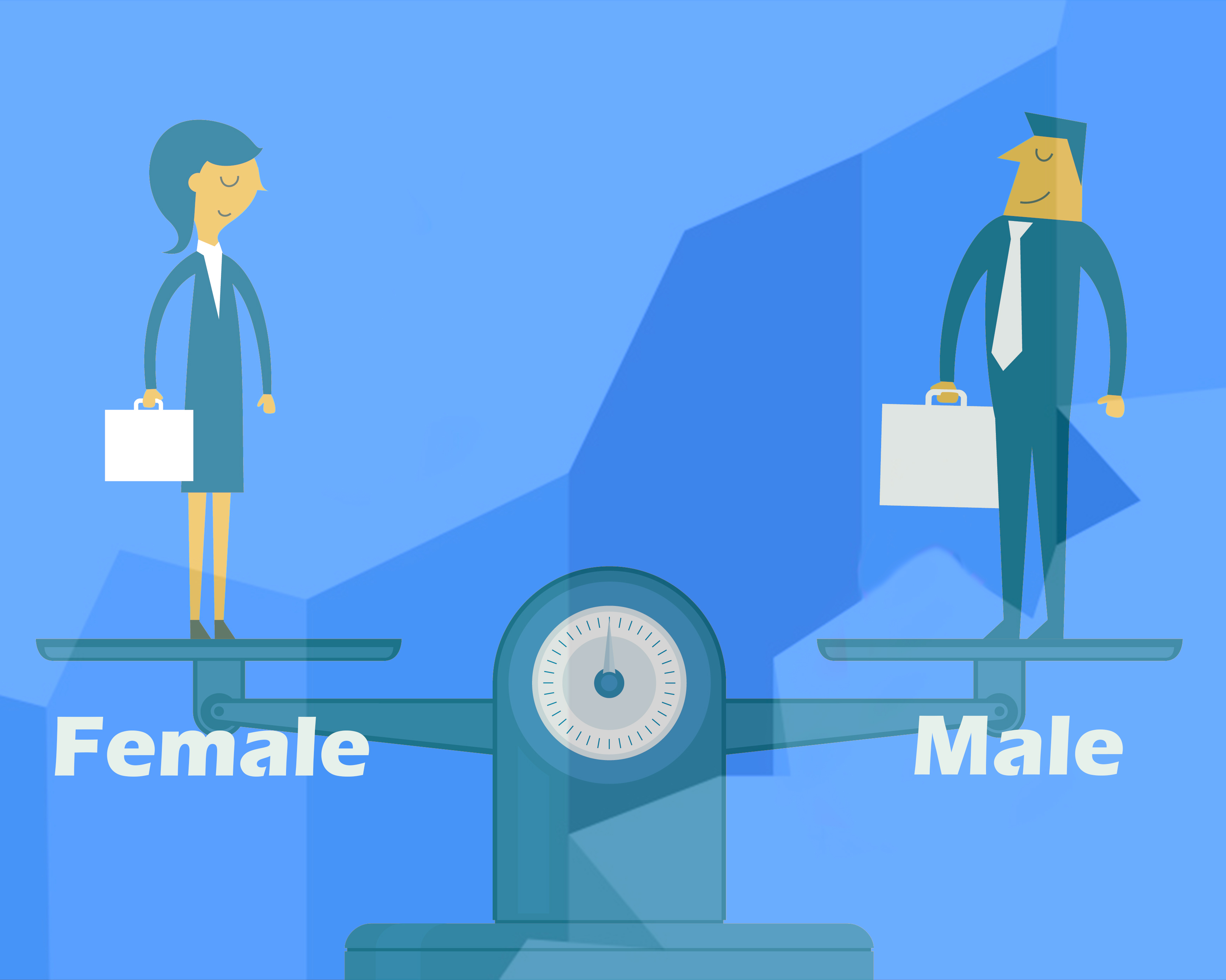 This ranking is based on four dimensions; Economic Participation and Opportunity, Educational Attainment, Health and Survival, and Political Empowerment. These metrics calculate the gender gap in the countries. Let’s take a look at these gender space determinants in detail.

This determines how many girls and boys are enrolled in primary, secondary and higher secondary schools. This gives us a clear indication of how much access we have given to our daughters. This is the ratio of the female literacy rate to the male literacy rate.

The health of women and men is put under consideration in this determinant. Two methods are used to determine this factor. First the sex of the child at birth; this gives us if the son preference culture is still causing the female fetus killings-abortions. Secondly, we calculate the gap between the life expectancy of men and women around the world in different countries.

Political decision making is taken into account in this determinant. The population of ministers, parliamentarians, and head of states also determines the political gap in a country.

Countries with the least gender gap.

Iceland has retained its top position in the list for ten years now. It has covered a gender gap of 85%. It has the lowest political empowerment space than any other country. The number of women in politics (senators, parliamentarians, lawmakers) is starting to decrease though. This country tops the wage space disparity.

Norway resumes its second position in the list this year too. Norway has filled a gender gap of more than 83%. Wage equality has widened, but the number of women in politics is constantly increasing. Norway also reduced a slight political gap this year moving from spot 3 to spot 2 in political power index. 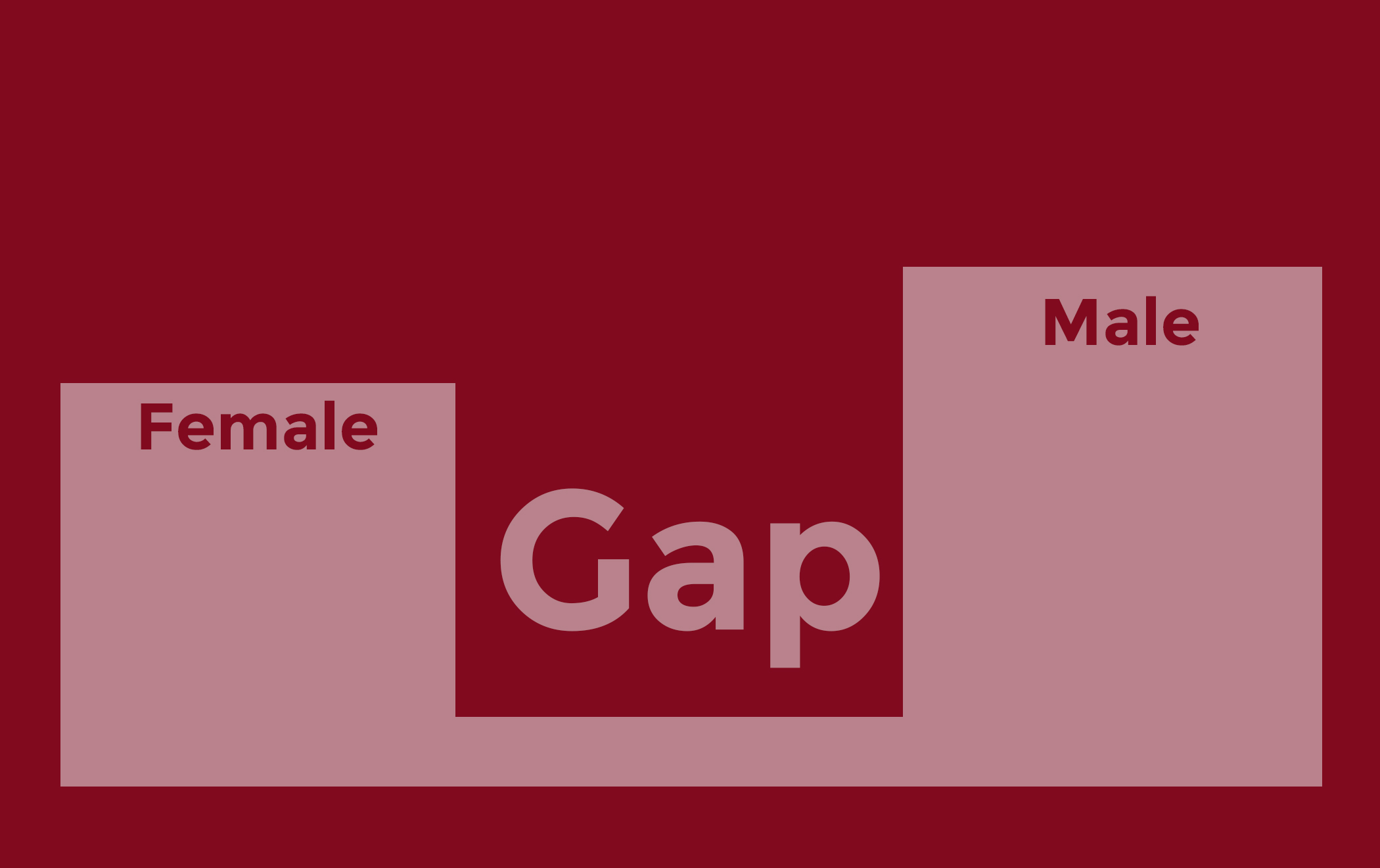 Sweden raised its position by two ranks this year after being taken down by one spot last year. Sweden has covered a gap of more than 82% of the gender gap. Sweden is doing quite well on the opportunity and political empowerment indices. Parliamentary participation has increased reducing the overall gender space. Sweden is lacing equality on health and Survival indices, and there exists a constant gender space in life expectancy.

Finland managed to cover more than 82 percent gender gap. Gender space persists in Economic Participation and Opportunity, and that is why the number of female legislators, lawmakers, and senators is declining. It is through the top ranking Nordic country to have closed the Education gap.

Nicaragua beats Rwanda by ranking on position five this year. It has managed to close a gap of more than 80%. This country has one of the highest numbers of female political representation placing this country on position two on the Political Empowerment subindex. The gender space has increased a bit because of the widening space in Economic Participation and Opportunity subindex because of the decreasing number of women in politics and government bodies. 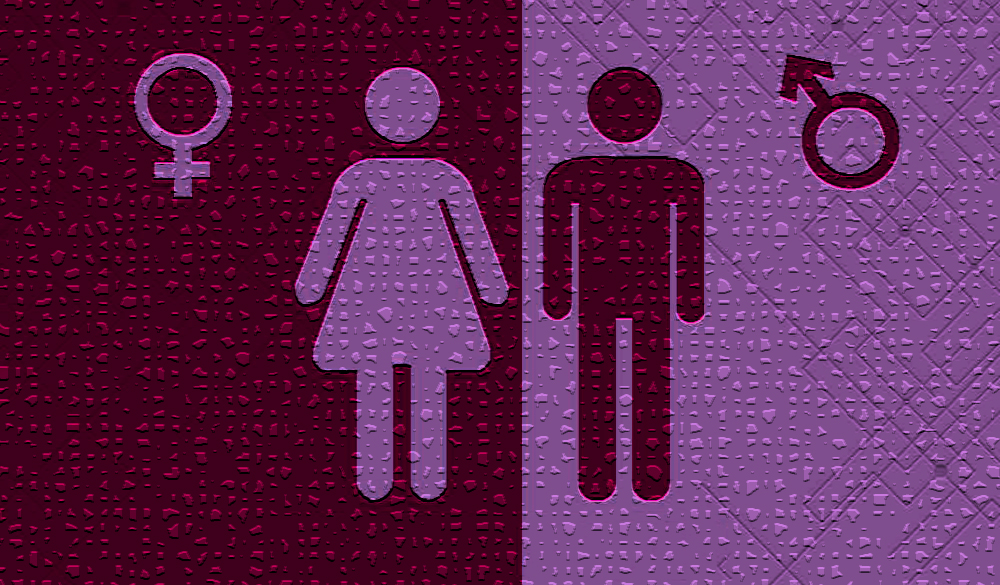 It is the first time Rwanda stopped constantly increasing its rank on the list since it was included in the list. This is because of the decreasing Economic Participation and Opportunity sub-index. This was led by the reduced wages of women, the wage gap for the same jobs and number of the female labor force. Rwanda has the highest female participation in parliament in the world which is 61%. Rwanda closed more than 80% gender gap this year.

This Eastern Asian country is the second country to be amongst the top ten ranking countries. It raised its rank by two positions by closing a gap of just under 80% of the gender gap. The Philippines has managed to reduce the gender space in Economic Participation and Opportunity gender space by improving the wage policies. The education gap remains fully closed.

Decreasing one spot Ireland ranks on position eight this year. Ireland closed more than 79% gender space. More girls being enrolled in primary schools the education space is being reduced for the first time since 2015.the women income gap has also been reduced. 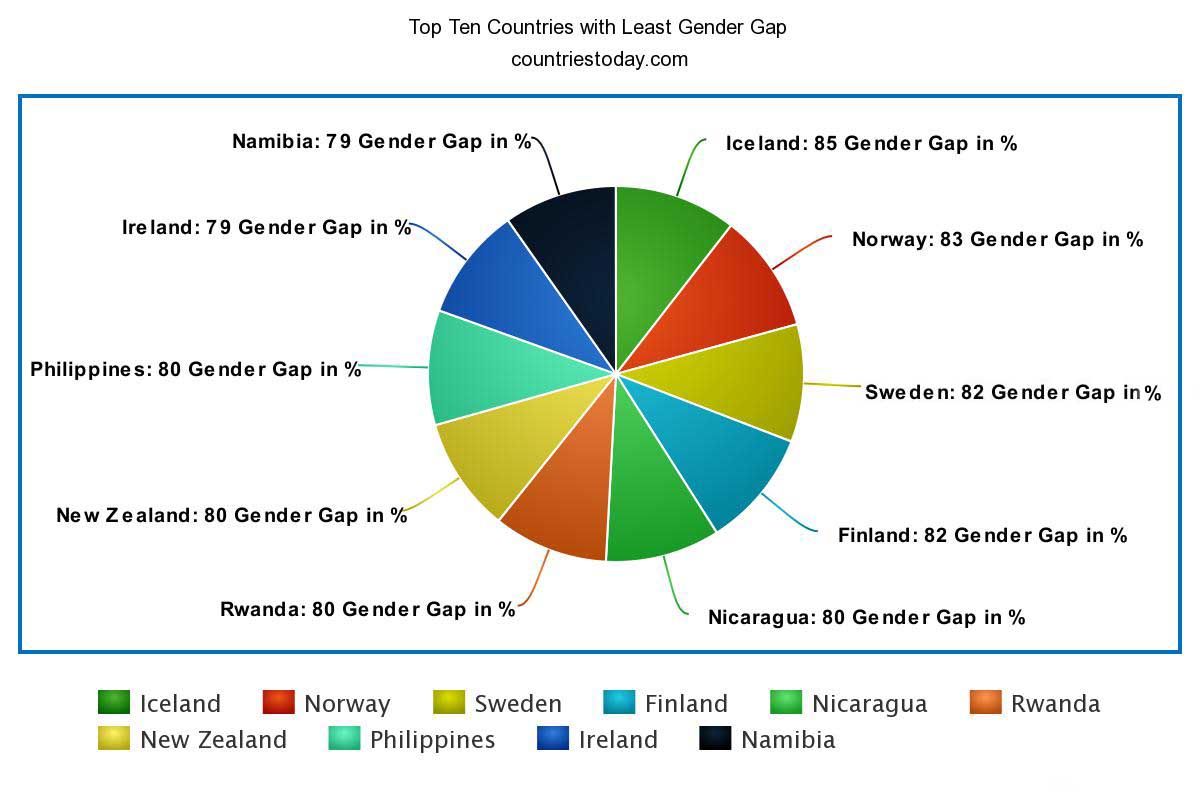 Increasing by three spots this year, Namibia managed to get in the list of top ten countries with the lowest gender space for the very first time in the history of Gender Gap Index. Namibia has closed around 79% of the gender space. It improved its indices by a 10% reduction in the gender space. It ranks fifth in the world in the highest female participation in parliament in the world. The Health and Survival space remains 100% closed since 2013. 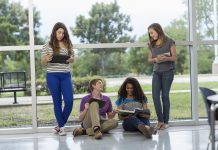 Countries with Best Education System where Students Love to Study