Tourism plays a vital role in the economy of a country. Since 2010, there has been a massive increase in tourism. Each state is securing its significant locations. Adding to that new tourist attractions are being made to attract the tourists from all across the world to come and visit their country. This helps the country in earning foreign exchange which in terms adds to the strength of the economy.

In recent years, every country has tried to get rid of all the security-related issues so that people feel safe in the country. There has been an effective upgrade in the source markets of the Russian Federation and Brazil. The demand has increased in recent years. The total international tourist arrival according to UNWTO 2018 was 1326 million.

Countries with Most Tourist Arrival: 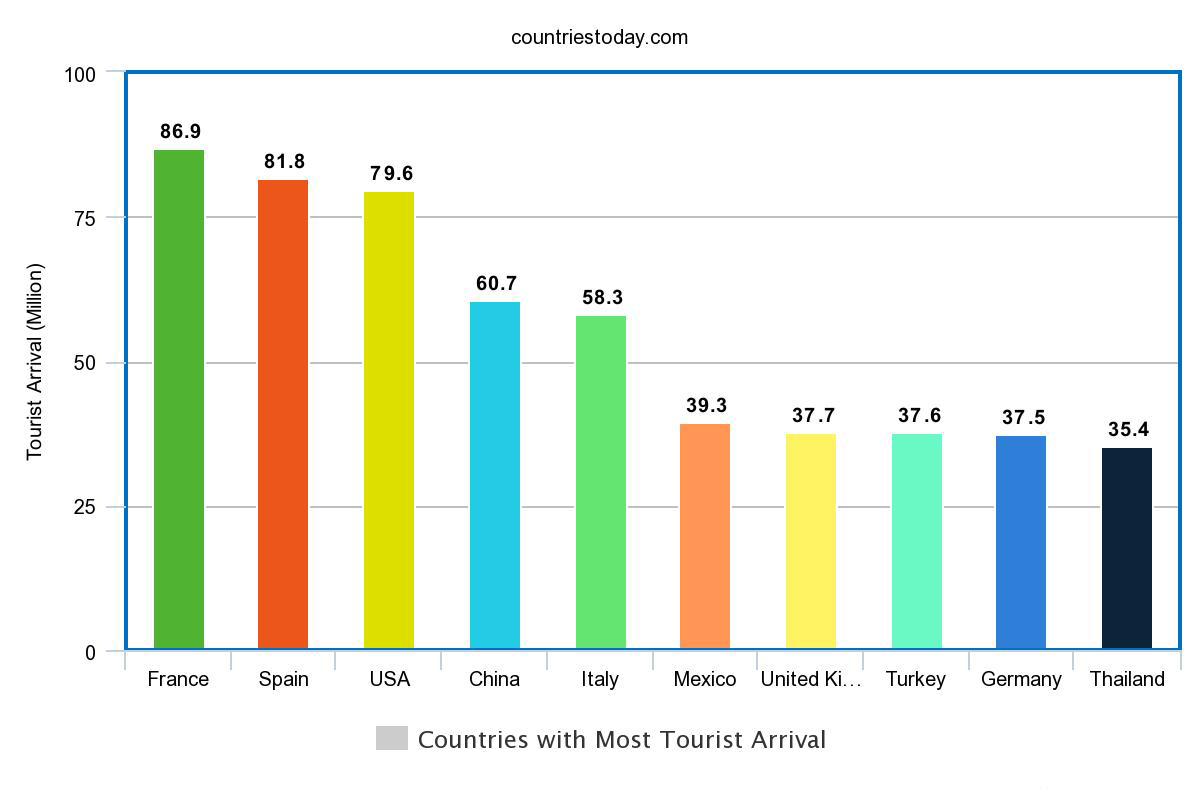 According to the report by UN World Tourism Organization published in 2017, the top 10 countries receiving the most tourists are listed below:

According to this list, France is the country that receives the most tourists from all across the world than any other country. About 89.6 million people visited France in the year 2017. Following France, comes Spain with second most tourist arrivals. More than 81.6 people visited Spain in 2017.

But these are just raw figures, and they don’t tell much about the profit that the receiving country gets from these foreigners. International Tourism Receipts show that how much money was spent by a tourist in a foreign country.

Countries with most Tourism Receipts: 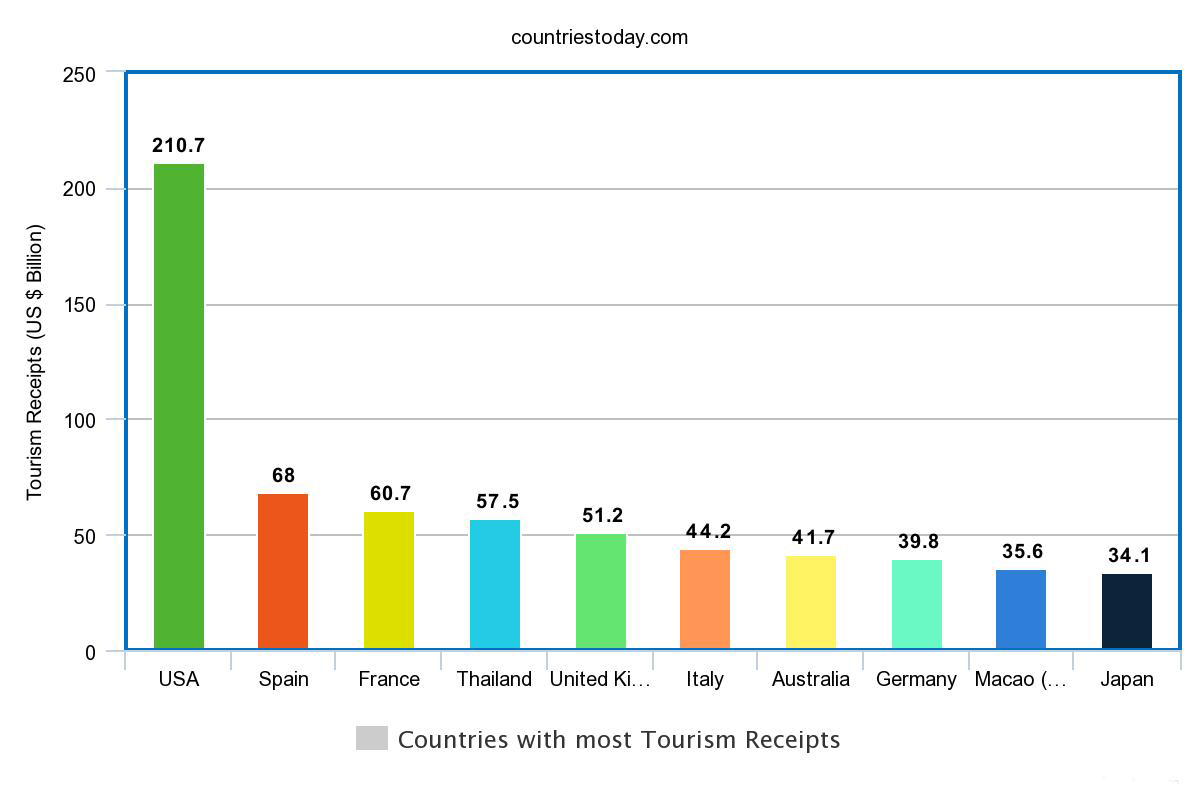 So here is a list of top 10 countries that have the highest tourism receipt according to Tourism Highlights 2018 published by UNWTO:

The United States Has the Most Tourism Receipts:

The United States earns the most amount of money from its tourism than any other nation in the world. Tourists spent almost 221.8 billion dollars in the US according to studies of the year 2017. Last year has been very profitable for the industry. The tourism in the US has increased because the economy of the country has strengthened and added to that the security of the hazardous places has been assured.

Recreational Industry and Notable Location US:

Los Angeles, New York and Las Vegas are the most beautiful cities in the country, and they attract tourists from all around the globe. Adding to the modernized attractions, there also are natural attraction out here. These include Grand Canyon, Hawaiian Beaches and Alaskan subarctic wonders. The tourism is at its peak in all 29 states, and the industry offers massive employment opportunities.

Spain with Second Most Tourism:

Santiago de Compostela is one of the major spots in here. That is because it is a final location for the traditional pilgrimage and the location is specifically known as Camino de Santiago. It attracts many people from all across the world mainly because of its religious significance and also for its history.

Cordoba is located in the Andalusian region of the country. Mezquita is located here, and it was constructed as a mosque. But now it’s turned into a cathedral and most of the original architecture of the old days can be seen out here.

Barcelona also holds significant importance in Spain, and it is one of the top travel destinations here. The city itself has too much to offer for the local audience and also the foreign people who come here to explore the culture. From historic architectural brilliance to the modern shopping centres and amazing nightlife. The famous architectures built by Antoni Gaudi include Casa Batllo and Sagrada Familia church. Both these places have an extraordinary structure and are designed with perfection. That is why they are quite essential places in Barcelona.

France generates the third most revenue from its tourism as compared to other countries. As per the facts and figures of the year 2017, France had the most tourist arrivals. About 86.9 million travelled from different countries to visit the glorious French attractions.

Eiffel tower is one of the significant destinations here. Located in Paris, it was constructed by Gustave Eiffel and is a symbol of Paris. It’s currently the highest building in the city, having a height of 1,063 ft. It is the most visited paid tourist destination, and more than 200,000,000 have visited the place.

Located on French Riviera, St Tropez is a resort community and is one of the major attractions in France. The beaches here are quite popular for sunbathing. Adding to sunbathing, people also come here for yachting, windsurfing and sailing. These beaches also offer scuba diving, power boats, waterskiing, and jet bikes. Bagatelle is a famous beach out here. But that place is only open to the wealthiest people in the world. 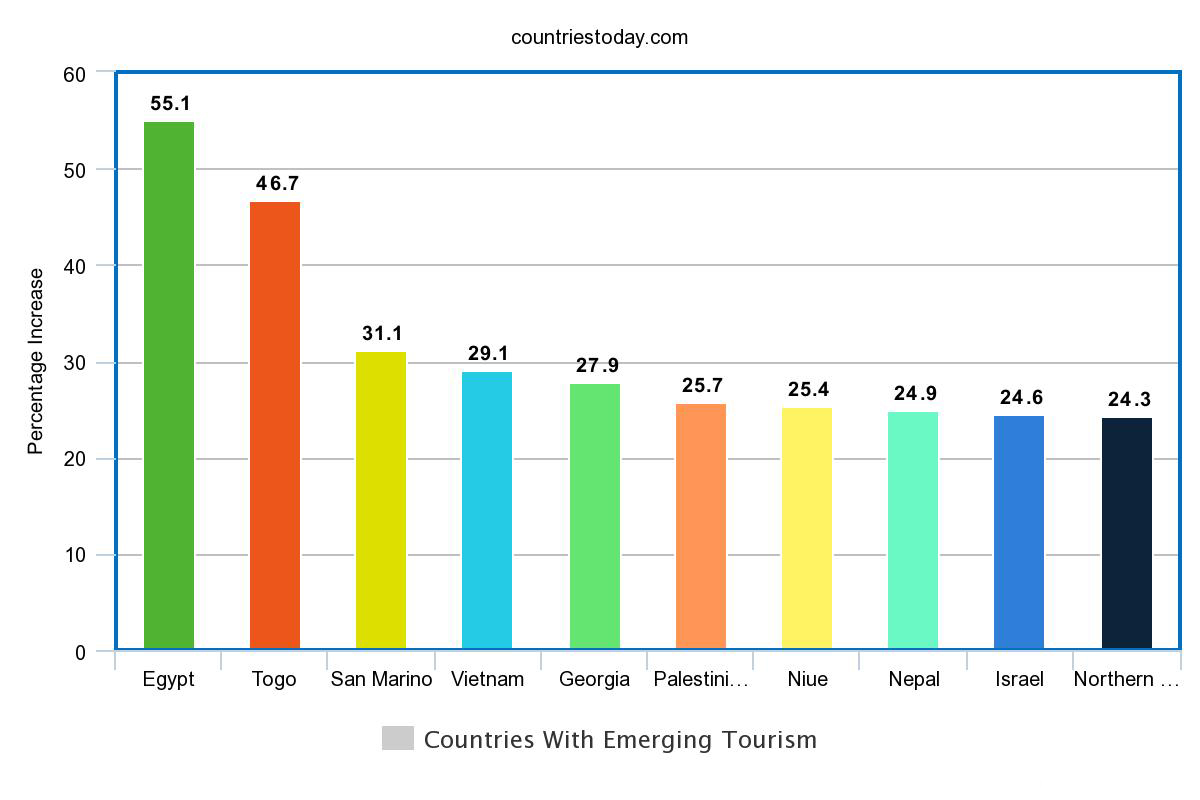 Some countries are improving their tourism. For this, they are removing all the hurdles that hinder in the way of promoting their recreational industry. Appropriate measures are being taken by the governments and private organizations to attract people from across the globe. The list below shows the countries that have improved their tourism.

Thailand comes at number 4 in the list. It generated 57.5 billion US dollars from tourism in 2017, and around 34.5 billion tourists arrived that year.

It is known to be the most famous tourist attraction in the whole of Southeast Asia and of course for a good reason. There is almost everything here such as thick jungle, cheap beach front bungalows, great food, blue beaches and few of the best luxury hotels and restaurants in the entire world. No matter what interest do you have or what budget you can afford, there is always something for you.

Phi Phi is recognized as one of the best places in Thailand; it is a stunning archipelago situated in the province of Krabi which is very close to Phuket. It is known to be the only island in the group which contains permanent inhabitants. The most famous movie “The Beach” was filmed at the smaller Ko Phi Phi area.

Hua Hin Beach which was initially for King Rama VII as a royal getaway in 1920 is a favourite weekend place for people of Bangkok. Today many tourists from all across the world visit this 8 km long beach. It also gives a splendid site of Klai Kangwon Palace. Plus, it is also known for having a large number of golf courses in all across Thailand.

The fifth place is occupied by the United Kingdom in the list. In the year 2017, the country collected 51.2 billion US dollars income and 37.7 million tourists.

The United Kingdom these days is an amalgamation of native and immigrant cultures, holding vibrant modern culture and fascinating history. Both of these have a great impact on the wider world. Its true Britannia is no longer holding the strings of the world, but the UK is still known to be the tremendously popular place for many tourists. London (the largest and capital city of UK) and New York often recognized to be the only two cities in the world having global importance, but a lot of people visit to see the beautiful countryside and quaint villages.

Wales is known to have a great history with remaining Great Britain, but the open nature of its residents and jagged beauty of its landscapes make it a quite distinctive destination for tourism. When it comes to the tongue-twisting Welsh language, the first time tourists find a quite obvious difference between Wales and other places.