With the advancements in technology, some methods have been devised to lower the emission of Carbon Dioxide. The governments and other bodies in different countries are taking radical measures to reduce the emission of toxic chemicals from industries, automobiles and other emitting entities. CO2 and other poisonous gases pollute the atmosphere and affect the ozone layer also. Which in terms causes its depletion, causing global warming in return.

China is one of the best economies in the world. The development in the country is progressing by leaps and bounds. Chinese are the most hardworking nations in the world. But on the other hand, there are more industries out here than any other country. These industries emit Carbon dioxide and many other poisonous gases that add on to the toxins in our atmosphere. Adding to that, China is also a populous nation. So more vehicles combust fuel, emitting more CO2 in return.

This is the reason why China stands first on the list as it is the largest emitter of CO2 in the world. According to a study conducted by the International Energy Association (IEA) in 2015, China emits about 9040 million metric tons of CO2 emitted by fuel combustion.

The United States is the fiercely developing country in the world. It has a better economy than most of the other countries on the planet. Following China, it is the largest emitter of Carbon Dioxide, emitting 4997.5 metric tons of CO2 through combustion of raw fuels. The difference between the emission of US and China is that per capita release of these gases is about 6.59 metric tons while in the US it’s more than half of that, i.e. 15.53 metric tons per capita.

US and China are the largest emitters, but recently they have been taking radical measures to decrease the emissions of these poisonous gases in 2015. China is now focusing more on the use of renewable resources. The nation is reducing the consumption of coal to protect the environment.

Coal is used in the vast amount here because there are many coal mines in the country. So instead of using the imported oil and gas, it uses coal as the primary source of energy. The industrial demand for electricity has increased in India. So the nation produces more electricity from the combustion of solid fuels.

Russian Federation, One of the Heavy Emitters:

On the fourth rank, stands the Russian Federation, emitting more than 1468 metric tons of carbon dioxide. Natural gas is abundant in the country. So natural gas is used as a major source of energy in Russia. In fact, Russia is one of the countries with the largest deposits of natural gas in the world. Natural gas contributes to 50% of the total emissions of CO2. Adding to that coal is also used for electricity and power generation. So the combustion of coal makes up the other 50% of emissions.

Japan produced 1141 metric tons of carbon dioxide from the combustion of fuels as per the facts and figures of the year 2015. The per capita emissions in the country are about 8.99 metric tons. Like other countries, Japan also uses a large amount of natural gas and coal to produce electricity for the massive population.

Some nuclear power plants were installed in Fukushima. An earthquake of magnitude 9.0 hit Japan in 2011. A tsunami also caused many destructions out here. Due to these natural disasters, the plant suffered some major damages. The reactors were damaged, and they started leaking the radiations. Because of this, the reactors could not start the operations. So these nuclear power stations were shut down.

Due to the shutdown of these reactors, the consumption of fossil fuels increased even more. Japan is now planning to reopen these nuclear power plants to produce power and to reduce emissions of CO2.

The advancement in technology and discoveries have, however, helped a lot in protecting the environment through less emission of CO2. All the major vehicle manufacturing companies are now focusing on producing hybrid and fully electric automobiles that have fewer emissions. Tesla claims that its vehicles have zero emissions as they are entirely powered by batteries. Adding to that, the company is also working on producing electric trucks so that the logistics department also uses electricity instead of bigger trucks. The old trucks release more poisonous gases as they burn more fuel. But the electric trucks have 0 emissions and are more energy emissions.

Countries With Most Emission: 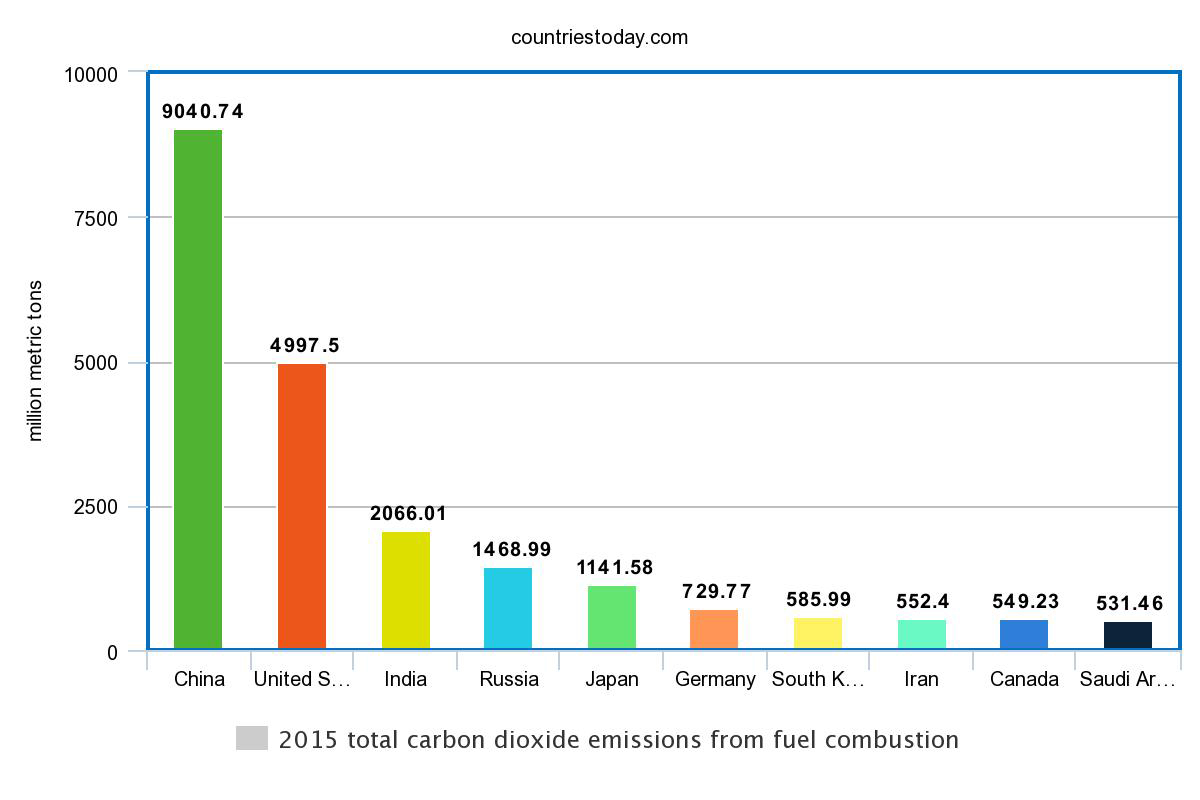 Down below is the list of countries with most emissions:

The Sectors that Take Out Most Poisonous Gases:

Many industries burn different fuels for the production of their products. There are some sectors that discharge most poisonous gases.

Production of Electricity and Heat

Countries like China, Australia, South Africa and Poland produce more than two-thirds of their electricity by burning coal. So as the population of the world is increasing, there is an increased demand for electricity. There are other sources of production also, but in some countries, the lack of technology and raw materials hinders in the way. 42% of the CO2 is emitted from the production of electricity and heat which is more than any other source of emission.

Transportation makes up about 24% of carbon dioxide. We all use cars, motorbikes, and lots of other vehicles for going from one place to another. These transportation commodities burn fuel and release poisonous gases. Many countries are working on influencing the car makers and other manufacturers to produce vehicles that emit less toxic gases. In fact, in some countries, you will be fined if your vehicles emit more CO2.

Adding to that a lot of research is being done to use battery-powered vehicles. Tesla’s cars have zero emissions. 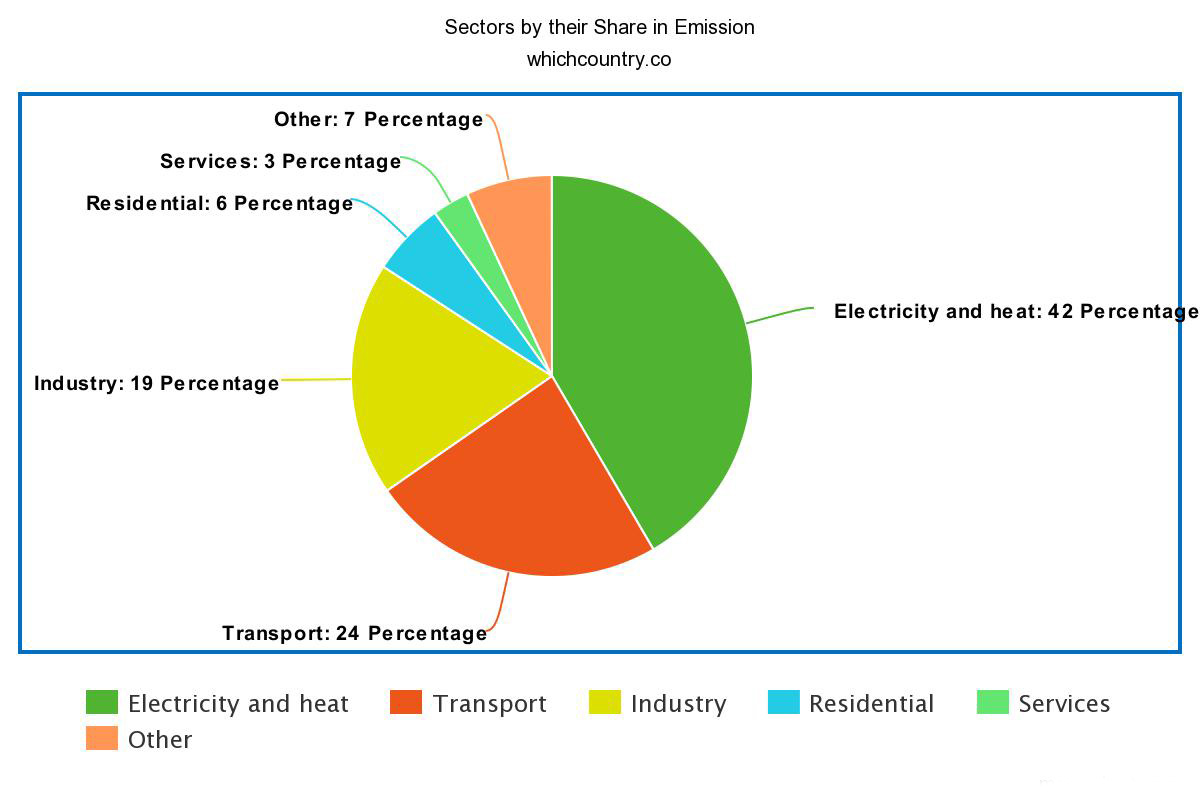 This problem is not impossible to cater. That is because in this age we have the technology and innovation to devise ways and means to reduce the emission.

World Economic Forum Young Global Leaders ran a competition known as Decarbonathon. The purpose of the competition was to explore the ideas that could help to decrease the CO2 emissions. From the event, the authorities found out that 5 of these technologies are quite helpful and can be implemented to reduce the release of some toxic gases.

Mobiliteam also appeared in the contest and presented an innovative idea to reduce energy consumption the vehicles. That in terms leads to the low combustion rate, reducing the emission of carbon dioxide. The idea is to reduce the power required by the air conditioners to work. As per their strategy, it doesn’t affect the passenger comfort. It takes almost 5 to 10 per cent of the total fuel consumption of the vehicle.

The idea was appreciated because the air conditioners are a major commodity in cars and other vehicles. The application of their idea could have a great impact on decreasing the emissions.

The idea of Bynd:

Another brilliant idea was presented by BYND. The company is working on the concept of developing a car pooling app that could reduce the use of more cars. They’re looking forward to signup companies that are located in the same areas. The devised method allows the employees that have to reach the same or nearby locations. This would help individuals with the same destinations to travel together in one vehicle instead of driving individual cars and motorcycles. 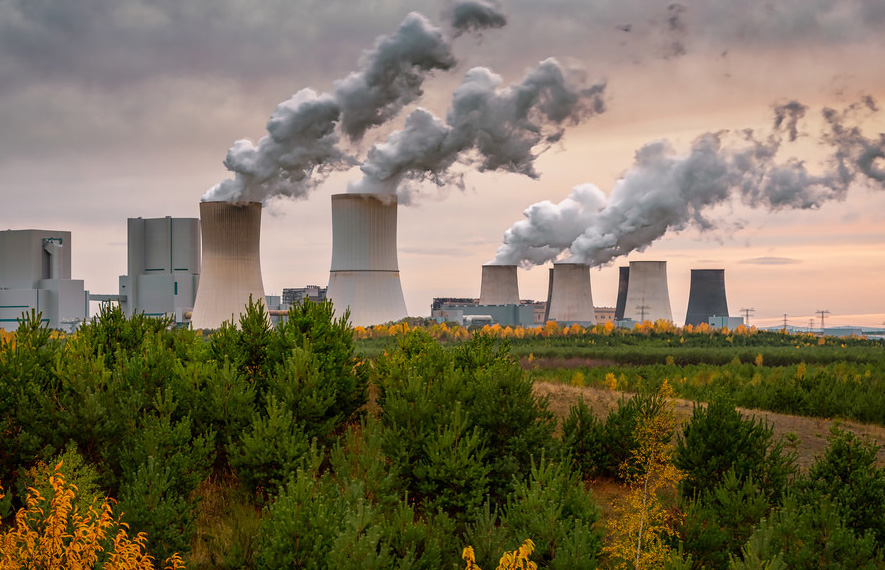 As an individual, we can also be a part of this procedure by reducing our daily life emission of toxic gases. We should be careful in the household usage to ensure that less CO2 is produced from burning. Adding to that our means of transportation are the cause of most emissions. We should keep our cars tuned and well maintained, so that let out fewer gases.

Individually every person can try on his own to help the cause. But the part of government is more important in this case as one or two persons cannot make much difference. But if the government works on projects and developments that help the cause, then a nation, as a whole can make a great difference in decreasing the emission of harmful carbon monoxide and carbon dioxide. Adding to that the government can offer collective transport facilities like buses and trains. This will help the cause as every person would not use their car for going from one place to another. 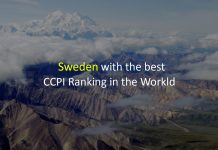