Health and hygiene is the key to a healthy lifestyle. There are many factors that impact the ecosystem of the planet. These factors indicate the hygiene conditions in a specific region. The Yale Center for International Law and Policy researched the environmental conditions is 180 countries all across the world. They considered many factors to rank the nations by their environmental performances. These factors include air quality, water and sanitation, air pollution, water resources, Forests, Climate & Energy, Heavy Metals, Biodiversity & Habitat, and agriculture.

Most Clean and Hygienic Countries Index: 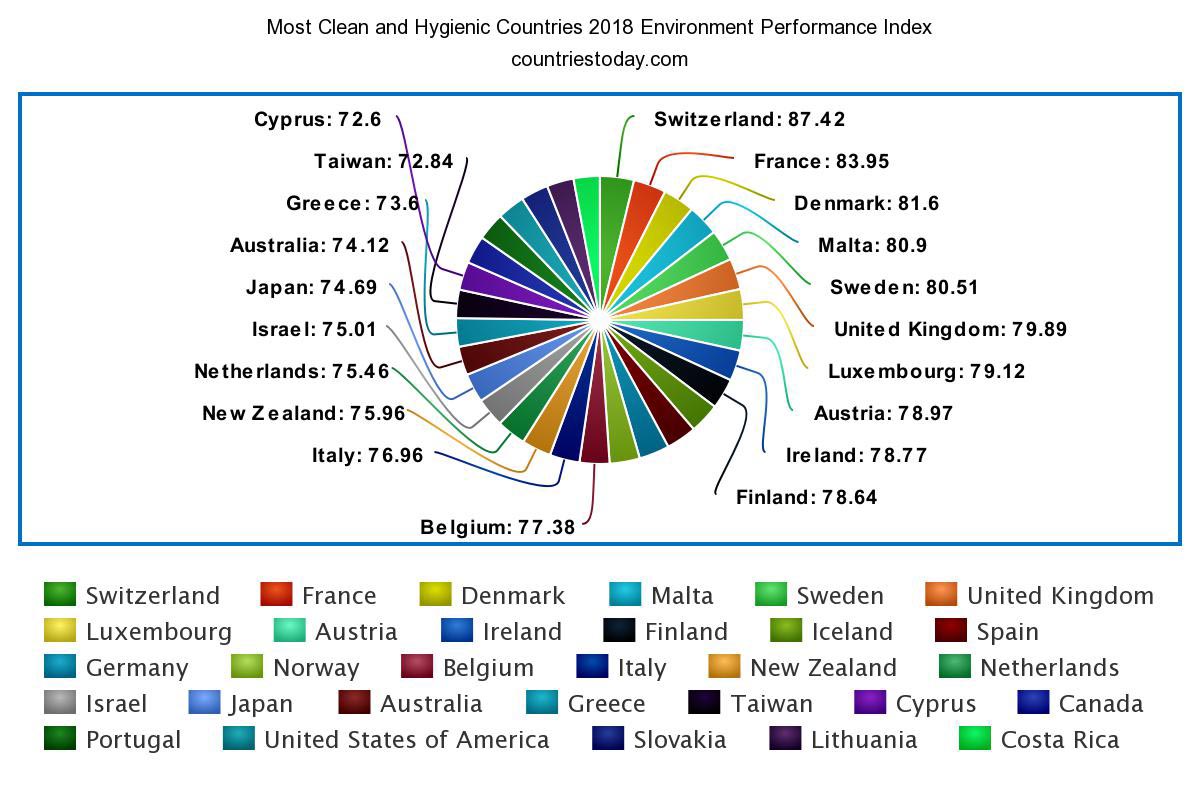 The studies of Environmental Protection Index show the conditions of health and hygiene conditions in various nations across the globe. Following is the list of top 30 countries that have the beast environmental health as per EPI Ranking:

These statistics show that Switzerland, France, and Denmark are some of the countries that are considered to have the cleanest environment. On the other hand, Burundi, Bangladesh, and the Democratic Republic are some nations with the least suitable environmental conditions.

Switzerland: The Cleanest Country in the World

With a score of 87.42 on the EPI, Switzerland leads the world in the environmental uprightness. It is a beautiful country with unique and breathtaking landscapes. Back in 2012, the biodiversity of the country was at stake. So the country started taking radical measures to control the conditions on a national level. The country prefers the use of renewable sources of energy as compared to energy produced from combustion. Adding to that many steps have been taken to reduce the urban sprawl. These are some of the reasons why the country leads the world in environmental stability.

France: One of the Environmentally Stable Nations:

France is one of the nations that have effectively reduced pollution. The emissions have been cut down at a high rate since the last few years. The reduction of greenhouse gases and carbon dioxide has helped in protecting the atmosphere. Adding to that, the country has many forests that cover large areas. This helps in cleaning the atmosphere. Most of the electricity in the country is produced through nuclear energy.

The Environmental Performance of Denmark:

Denmark is also one of the nations that are cautious about keeping the surroundings and atmosphere clean and tidy. The country also aims to become 100% carbon-neutral by the year 2050. The government and other authorities in the country are investing in producing solutions that protect the ecosystem. They are planning to produce buses that run on clean fuel, rooftops that have green vegetation and a society that supports cyclists.

The CEO of Copenhagen’s Capacity stated that Copenhagen is aiming to promote a green and CO2 neutral capital. This also attracts businessmen from all across the world that is willing to invest in building a sustainable city. Adding to that, the city has also become a hub for companies that are making green technological systems. So, that is why Denmark shows 3rd out of 180 countries ranked as per their environment. 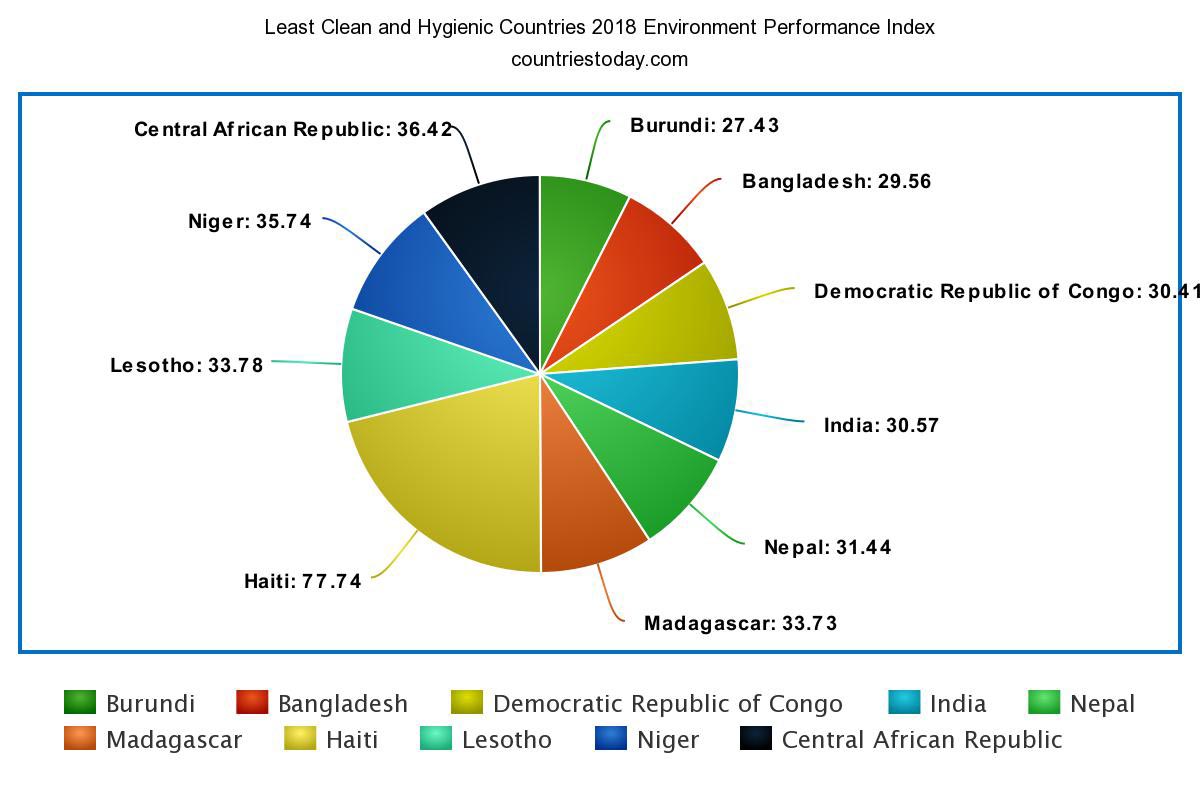 Following is a list of some of the countries that are the least clean and have poor and inappropriate hygiene conditions:

The results of EPI Index 2018, show that a country or a state needs to invest material wealth for the production of such an infrastructure that helps in protecting human health and the overall ecosystem. AS the urbanization is increasing, it is essential for the nations in order to build the facilities that provide clean sources of water, managing the waste water, and eradicating pollution.

Most of the African nations didn’t rank well on the index. In fact, they had least scores in almost all the aspects. Burundi, Bangladesh and the Democratic Republic of Congo had the least scores. They scored 27.43, 29.56 and 30.41 respectively. These countries also have economic issues, and the authorities cannot afford to invest more in environmental development. There sub-Saharan Africa is also facing many issues. These problems are mainly due to the increase in population. The healthcare system of these nations are also not in balance. Adding to that the United Nations also pointed out the fact that these nations live on less than one dollar per person a day. So in these miserable conditions, they cannot afford to invest in environmental programs.

Effect of Air Quality on the Environment

The studies show that air quality is one of the major environmental threats to public health. The research conducted by the Institute of Health Metrics and Evaluations depicts that two-thirds of disabilities and deaths from environmental risks were from air pollution. So the government of each nation should take steps and measures to lessen air pollution in the country. The countries with the most increased urbanization and industrialization are seen to have the most air pollution. China and India are known to be the nations that are urbanizing at a very fast rate, and thus the atmosphere is getting deteriorated every day.

Some countries are taking steps and measures to reduce the deterioration of the environment. Developed countries have proper rules and regulations. One of the leading causes of air pollution is the release of poisonous gases through combustion. The use of vehicles that release more carbon dioxide and carbon monoxide is prohibited. There are other ways to reduce the pollution of the air. Electricity is a vital necessity these days, and most of it is being produced through combustion. The use of renewable resources of energy should be used to generate electricity. These include water, wind and nuclear energy.

The more the number of vehicles on the road, the more will be air pollution. Electric vehicles are becoming popular these days. Many popular vendors like Tesla, Volvo, Toyota, and BMW are focusing more on producing more electric power vehicles. That is because they are environment-friendly and don’t emit any poisonous gases.

Use of Renewable Resources of Energy

All the energy sources including fossil fuels like coal, oil, and gas have some impact on our environment and ecosystem. They cause many health problems, pollute the water and air. These in terms lead to global warming and other disturbances in the ozone layer. On the other hands, renewable sources of energy are eco-friendly. The renewable energy sources include wind, solar, hydropower and biomass energy. But these sources of energy require specific conditions to get benefit from. For example, the windmills cannot be deployed in the areas where the airspeed is low.

Hydroelectric power is the most common source of obtaining power. This uses the flow of water to run to generate and produce electricity in return. Many countries across the world are building dams on the rivers to lessen the production of energy from the other sources. China is known to be one of the countries that have the most hydroelectricity projects. Many dams are being constructed in China, and the generators of high capacity have been installed to produce electricity. Countries like the United States are planning to increase the capacity of their dams instead of constructing new ones.

Many other projects on the use of renewable resources are in progress. Tesla is one of the companies that is working on producing battery-powered vehicles. This idea was implemented to produce eco-friendly cars that have low emissions.