70% of our earth’s surface is covered with water. Of this 70%, more than 97% of the water is present in oceans. The remaining water is present in glaciers, atmospheres and surfaces. These surfaces include lakes and rivers. The amount is close to 0.02%, but it is adequate to be controlled by humans. We humans, control this water by constructing these barrages.

Number of Dams in the World 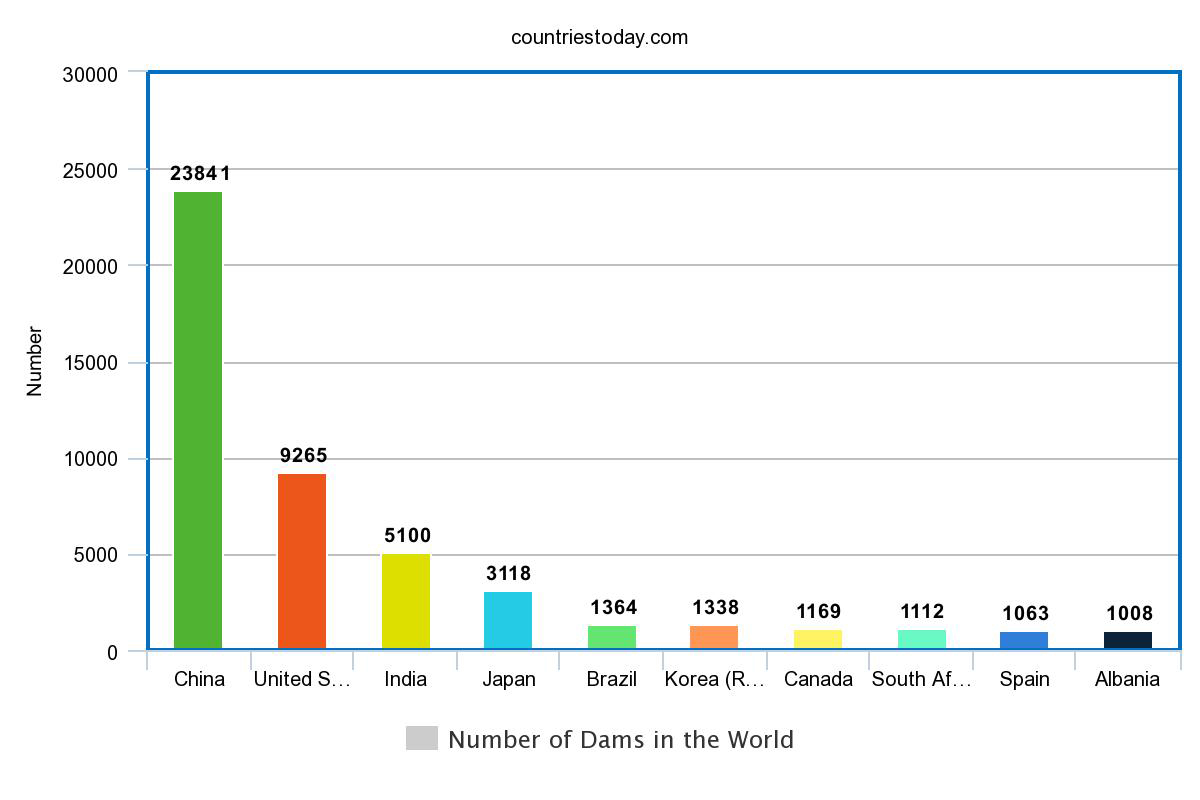 Dams have been used for supplying water for agriculture, daily use and for other purposes since the start of human civilization. There are more than 800,000 of these worldwide. Down below is a list of countries with most dams.

China is one of the leading countries in the world, and it is also among the most populous countries. China also has the most number of dams in the world. It has 23,841 of these barrages.

Highest Dams in the World: 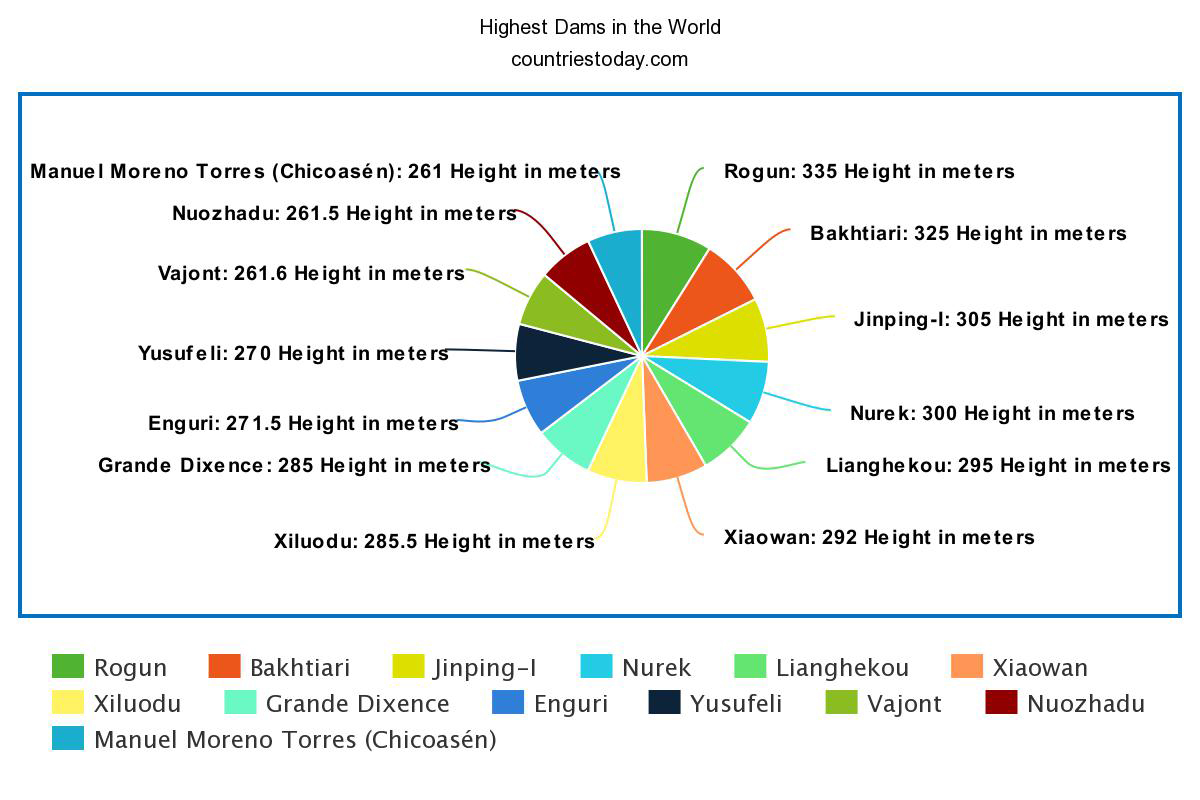 Dams are often classified according to their storage capacity and height. Down below is the list of them that have the most height.

The Rogun and Bakhtiyari Dam secure the first two spots on the table, but they are still under construction. Rogun is located in Tajikistan, and it has a height of about 335 meters. But it is not completed yet. It is expected to be completed in 2018 – 19.

Rogun Dam: The highest Dam in the Making:

Over the Vakhsh River in Tajikistan, lies Rogun Dam with the height of 1099 ft. (335 meters). It is an embankment dam whose construction was started back in 1976. The construction is expected to be completed in 2018. It was the Soviet Era when it’s construction was initiated. But later on, due to the collapse of the Soviet Union, the project was abandoned.

The power station of it has a capacity of 3600MW, and the annual planned electricity generation is expected to be 13.1TWh. A total of 6 turbines are installed upon the dam for power production. Each of the turbines has a capacity of 600MW. The total capacity of the reservoir is 13.3 km3. The surface area of the dam is 110.7km2.

Bakhtiyari dam is in construction in the Zagros Mountains in Iran. It has a total height of 325 meters (1066 ft). The primary reason for the construction of this barrage was the production of hydroelectricity. The power station is planned to give a total output of 1500MW. 6 Francis type turbines are installed, and each has a capacity of 250 MW. The annual electricity production is expected to be 3 billion kWh.

The dam will also serve as the second largest reservoir of water in Iran. It has a capacity of about 5.2 billion m3. Due to this massive capacity, it will serve a great role in the supply and regulation of water.

China Has The Most Number Of Dams:

China is one of the most populous countries in the world. Due to the urbanization and industrialization, the demand for electricity to power the industries is massive. Hydroelectricity serves as a significant source of energy in the country. As of 2015, China produced about 1,126 TWh of power from hydroelectric power stations.

The country has insufficient reserves of natural resources. The deposits of coal and fossil fuels are not enough to meet the power demands. So they focus more on renewable sources of power generation like hydroelectricity. The policy of China is to attain energy independence and using water to produce power serves the purpose.

China, being the country having most dams, is also the home of the highest dams in the world. Jinping-I is the third highest one in the world and is located in the People’s Republic of China. The total height of it is about 305 meters. It is also listed as the highest one of the world according to the recorder height in Guinness Book of World Record as of the year 2012.

The dam is about 16 ft. Taller than the Eiffel Tower. The construction of this mighty infrastructure was started back in November 2005. Impoundment of Jinping-I was initiated in October 2008. The power station has a capacity of about 3,600 MW. With this much of capacity, the power station can produce about 16 to 18 billion kWh of electricity annually. The total length is 1,865 ft with the total capacity of about 7.7 billion m3. Of the total capacity, approximately 4.9 billion m3 are in use.

On the Vakhsh River lies Nurek which is an earth-fill embankment dam. It is the fourth highest of it’s kind, throughout the world. Its construction was started back in 1961, and the primary purpose of constructing this mighty architecture was to produce electricity from water. It has a power station installed on it which has the capacity of about 3015 MW.

For the generation of electricity, the power station required some generators and the first one was on Nurek was commissioned in 1972. After seven years, the last generator was installed on the dam in 1979. Following Jinping-I, it is the second highest dam. Adding to that Rogun is also in construction in Tajikistan. After completion, it might turn out to be the highest one.

Lianghekou is under construction in the Sichuan Province of China over the Yalong River. It is basically a concrete face rock-filled dam. The construction was started in 2009 and is expected to be completed by 2021. The total height of it is 295 m (968 ft). It will support the energy independence objective of China by producing electricity from a renewable source. The power station has installed capacity of 3000MW. 6 Francis type turbines are installed for production of electricity, and each has a capacity of 500MW.

Located in China, over the Lancang River, stands the sixth highest dam in the world. The construction of this hydroelectric power project name Xiaowan was started in 2002. It took a total of 8 years to complete and begin the operations of this masterpiece. Huaneng Power International was given the responsibility for its construction. It cost a total of 3.9 billion US dollars to construct this project.

Xiluodu: One of the Highest Dams:

Xiluodu dam is Located on the Jinsha River in China, it is the seventh highest dam in the world. Production of hydroelectricity is the primary purpose of it. The installed capacity of the power station on it is about 13,860 MW. The construction of this arch dam was started in 2005, and the first generator was installed in 2013. China Yangtze Power manages the operations, and it is known to be the third largest power station in the world.

Grande Dixence is located above the Dixence River in Switzerland and is the fifth largest dam in the world. Its height is 285 m (935 ft.), and the length is 700 meters. The primary purpose of its construction is to produce electricity from water.

How Dams Help In Protecting The Environment:

There are many ways of producing electricity. The majorly used sources of generating electricity are from water, coal (combustion) and nuclear energy. Most of the countries in the world, produce most of their electricity from the burning of fossil fuels.

Because of this, the emissions of carbon dioxide are massive. China and United States are largest emitters of CO2 as they emit 9040 and 4997 metric tons of CO2 respectively. Dams promote the production of hydroelectricity, and it is a clean, renewable source of producing power. So Dams also help in saving the environment as they reduce the combustion of fossil fuels and in terms, reduce the emission of poisonous gases.

Adding to that dams also protect us from natural disaster. When the water is not controlled, it causes the flood in the nearby area. So dams are constructed to control the flow of water. Many of them are built at a great height, and that helps the production of electricity also. In the areas with heavy rainfall, the barrages help in storing the extra water. This hinders the flow which in terms prevents from the eruptions of floods.