In the developing countries, the defense has become way more important than it used to be. Due to the clashes with other nations, a country needs to have a stable and advanced mechanism. This helps it to protect itself from attacks. That is the reason why the latest weapons are being developed. The developed nations like the United States, China, and Russia, are researching to build new weaponry to compete.

Not every country can afford to produce their weaponry on their own. These nations have to import weapons from other countries in order to defend themselves in hard times. The United States is one of the countries that export the most arms.

Countries that Export Most Arms: 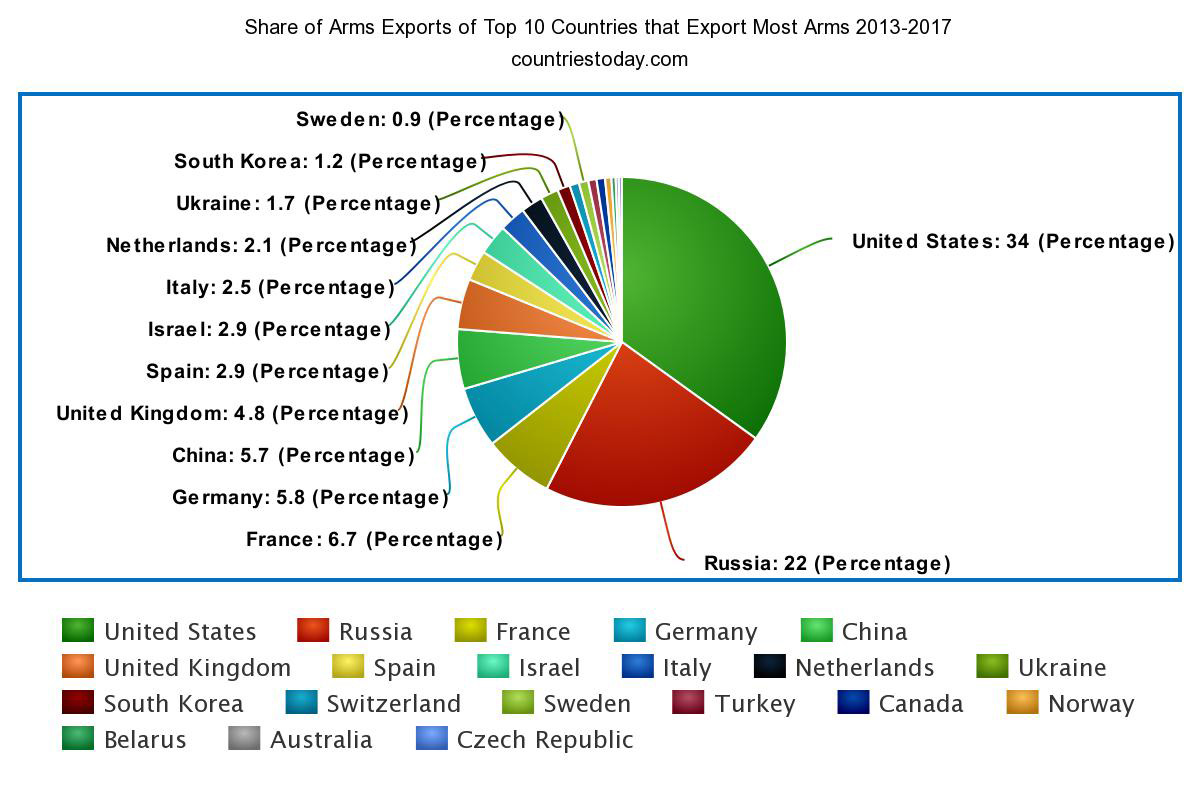 As of the 2017 report of Stockholm International Peace and Research Institute (SIPRI) following are some of the countries that export most percentage of arms in the world:

The United States is the Largest Exporter of Arm:

Comparing it to the rest of the world, 34% of the total export of arms and weaponry come from the United States. As per the studies of SIPRI, United States stood on top of the list in the countries that supply most weapons. It has remained the largest supplier for a long time as the last study of SIPRI in 2012 showed that it was a significant exporter from 2008 to 2012. The primary clients of US include Saudi Arabia, the UAE, and Australia as they imported 18%, 7.4% and 6.7% of the total exports of arms by the country.

Which Countries Import Most Weapons from the US:

The countries in the middle east make up to 49% of the total weapons exported by the United States. Adding to that it has sold guns and other defense equipment to more than 98 states. But by far, Saudi Arabia stands on top as it buys the most defense equipment from the US. 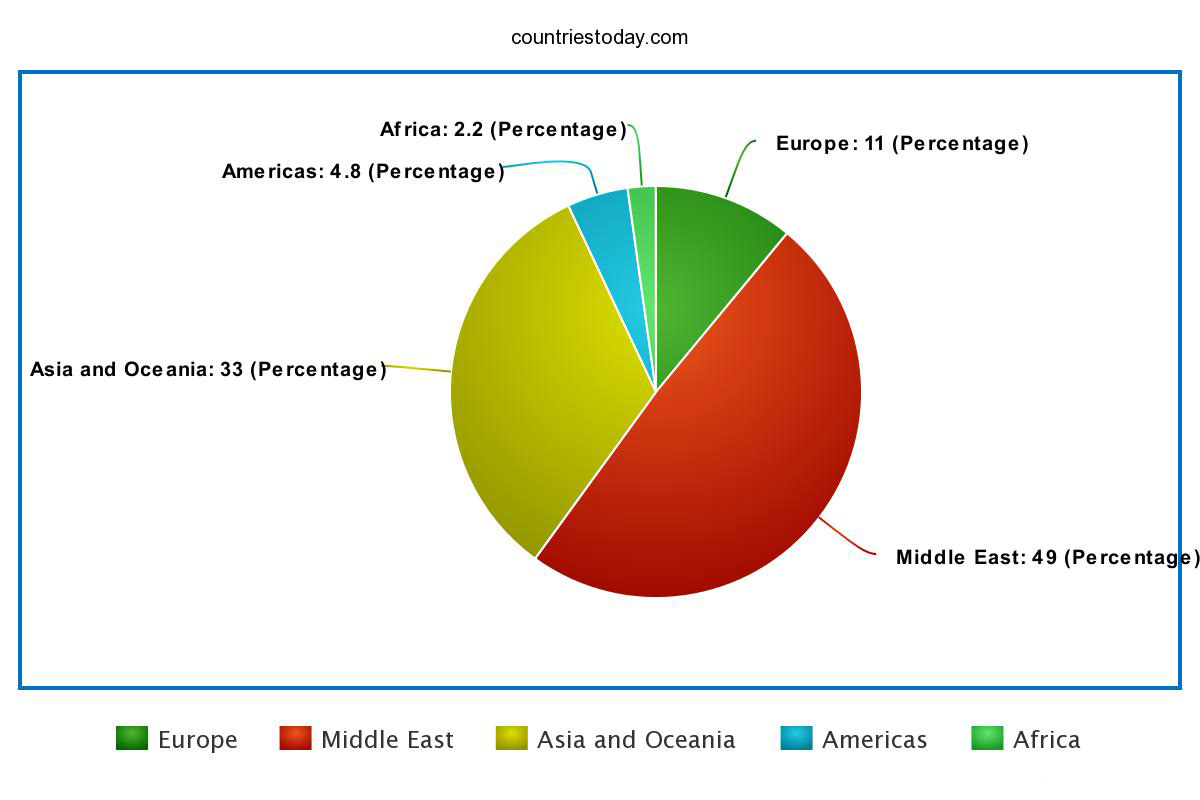 The transfer of guns and ammunition is sometimes used as a Foreign Policy Tool to form strategic partnerships with other nations. It is also strengthening its relations with Asian countries in order to beat China in the game. The country is making its ties with India. The delivery of arms to India has increased by 577 percent from 2013 to 2017.

The supply of USA is quite massive as it manufactures products of all kinds. Adding to that, it is also producing the weapons equipped with the latest technology. That is why many countries turn to the US for the supply of arms. Combat and Transport aircraft are the major exports. From 2013-17, it has delivered about 200 combat aircraft. Among these, there were 50 f-35 combat aircrafts. Twelve of these were sent to the UK, ten were sent to Norway, nine were received by Israel, Italy also got 9 of these, six were demanded by Japan and two each were sent to Australia and Netherlands. A total of 30 F-15SG were imported by Singapore and Saudi Arabia from the US. The supply volume of USA’s exports was quite smaller as compared Germany, Spain and Netherlands.

Russia stands second on the list of countries with the largest weaponry supply. As compared 2008-12, the exports of Russia have decreased by 7.1%. But in spite of the fall, it is the second largest supplier of arms in the world. The decrease in export was mainly because of the reduction in demand from the primary recipients. The supply of weapons to China and Algeria continued, but it was low in volume as compared to the last report. 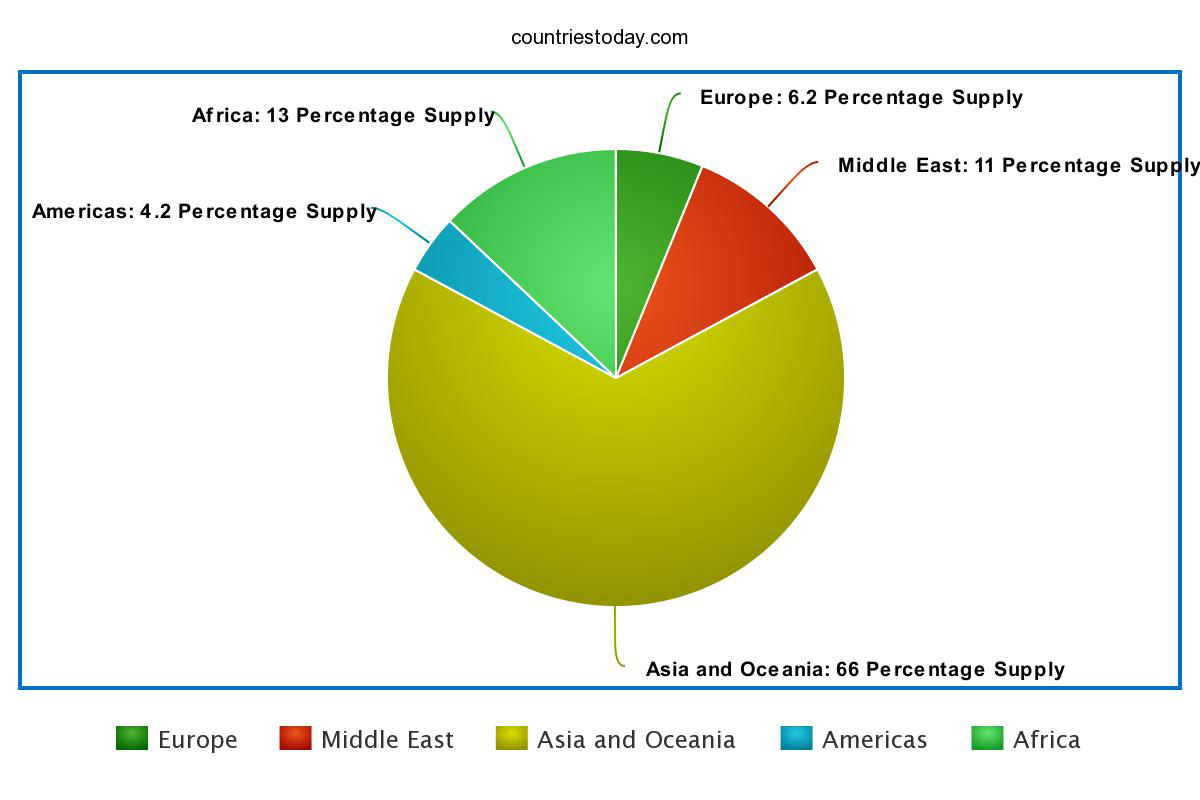 The primary clients of Russia are less as compared to the United States. A total of 47 countries received supplies from it. India, China, and Vietnam are the primary clients of the country. These three nations accounted for 58 percent of the total exports. India received 35%, China got 12%, and 10% of exports were obtained from Vietnam. 66% of the total arms were sold to Asia and Oceania.

23% of the global supply of arms was from the five major West European nations. These include Germany, France, United Kingdom, Spain, and Italy. Globally, France is ranked third, supplying 6.5 percent of the total exports. The supply of France has increased by 27% between 2008-12 and 2013-17. If we take a look at the local supplies, 42% of shipping was sent to the Middle East, 31% was received by Asia and Oceania, 10% was sent to other European Countries, 9.1% was sent to Americas, and 7.5% was imported by Africa.

The arms from France are imported by a total of 81 states. Egypt stood out to be the primary client of France, importing 25% of the total. The arms sales policy was boosted by the French Government. Due to this, they sold their combat aircraft and warships to Egypt. From 2013 to 15, many deals were signed with India, Qatar an Australia. Through these deals, several combat aircrafts and submarines were exported to these countries. India and Qatar, each received 36 combat aircrafts, and Australia bought 12 submarines from France.

The arms sale of Germany has decreased by 14 percent in the last few years. The export of weaponry to the Middle East remained to be a subject of debate in Germany during 2013-17. That is the reason 26% of the shipping was received by the Middle East. 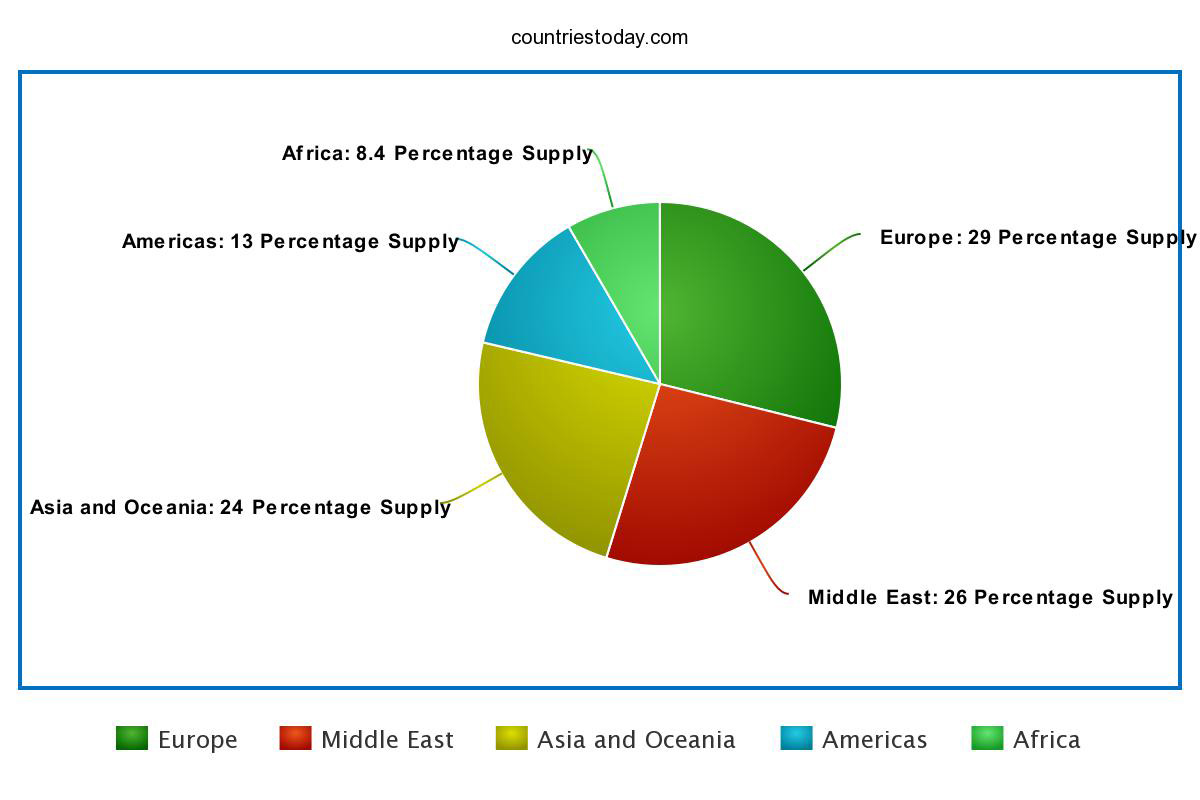 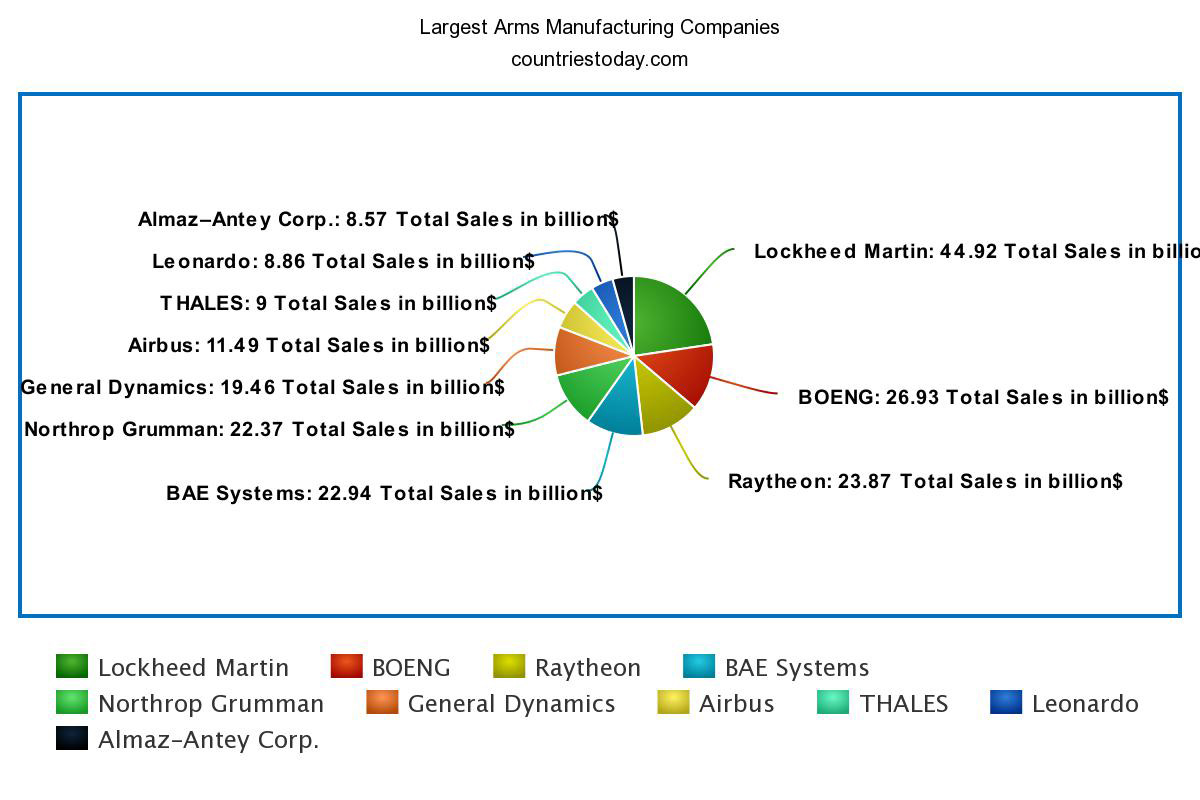 In 2017, a total of $398.2 billion was spent on the purchase of Arms and military services according to the new report of SIPRI. Among the top 10 suppliers of arms and other weaponry, five companies are located in America. So down below are some of the companies that account for the highest sales of arms:

Lockheed Martin is the largest manufacturer of weapons in the world. It is an American company with its headquarters located in Bethesda, Maryland. It made a total sale of $ 44.92 billion as per the facts and figures of the year 2017. The success of the company started when it accelerated it’s the manufacturing of f-35 Lightning II combat aircraft by purchasing another company, Sikorsky. The company works in the fields of aerospace, security, defense, and technology. It is also one of the top 10 government contractors in the United States.

The business segments of Lockheed Martin include Aeronautics and Fire Control, Rotary and Mission Systems and Space Systems. The company received more than 36 billion dollars from government contracts in 2008. The government has never issued that much of funds to any other company in the past. It is also involved with the Department of Defense, Department of Agriculture, Department of Energy and the Environmental Protection Agency. Adding to some information and surveillance operations of Central Intelligence Agency, Federal Bureau of Investigation, National Security Agency, Census Bureau, The Pentagon, and the Internal Revenue Service. The company also signed a contract to produce two advanced military communication satellites for the United States Air Force. 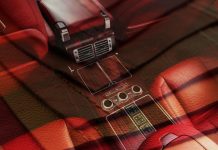 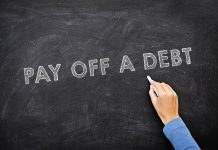 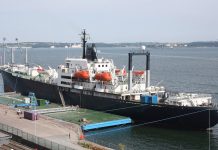